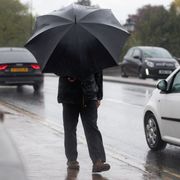 Strong winds could bring disruption to parts of the UK with forecasters warning of gusts of up to 65mph.

A Met Office yellow warning for disruptive winds stretching from Wales across to East Anglia and including all of the south of England is in place until 9am on Tuesday.

The winds are expected to sweep eastwards, with gusts of up to 50mph forecast for some inland areas and increasing to 65mph on the south coast.

The Met Office said delays to road, rail, air and ferry transport were "likely" amid fears the conditions could also cause damage to temporary outdoor structures and bring down tree branches.

"The winds should gradually ease through Tuesday morning," the Met Office said.

"The strong winds will be accompanied by some heavy rain at times."

The cause of the unsettled weather is an area of low pressure which is pushing eastwards, although it is expected to clear the UK early on Tuesday.

It means the heaviest of the rain should move away by the end of Monday, although it will still leave behind showers in some areas.

A cloudy and wet start is forecast for eastern parts on Tuesday, with "sunshine and showers" expected for much of the day elsewhere, the Met Office said.

Temperatures are expected to reach 12C (54F) in southern areas on Tuesday, but remain around 8C (46F) to 10C (50F) in the Midlands and further north.

A "cool feel" will remain in the air into Wednesday, with further showers forecast for the north and est.