World Cup: The Iranian football stars speaking out in solidarity with protesters back home 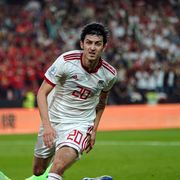 As Iran’s national football team prepares to face England in their opening World Cup match later, they do so as protests over the death of Mahsa Amini continue in cities across the country.

The unrest following the death of the 22-year-old woman in the custody of Iran’s morality police has grown into one of the biggest challenges to the ruling clerics for decades.

The crackdown on the protests has been violent, with at least 362 people killed including 56 children, according to the Human Rights Activists News Agency.

Since Miss Amini’s death, Iranian celebrities and sports stars have been among those voicing their support for the protests.

Earlier this month, a group of current and former Iranian sportspeople announced they had no choice but to turn on their own country and demand that Iran be withdrawn from the World Cup.

He added: "We believe that Iran is killing protesters.

"They should be banned until we have a democratic country like any other country in the world."

Former karate champion Mahdi Jafargholizadeh, who says he was tortured by state authorities in 2004 before later escaping while in Germany, highlighted the main reason why he believes there has not been more worldwide attention on Iran.

"Football is the best way to share our voices," he said.

"There is absolutely no internet connection between inside and outside of Iran, so how could people hear us?"

Sardar Azmoun, star forward for the Iranian national football team and among those named in the squad playing in Qatar, has spoken out despite pressure from the government.

"At worst I’ll be dismissed from the national team," he posted on Instagram.

"No problem. I’d sacrifice that for one hair on the heads of Iranian women. This story will not be deleted. They can do whatever they want. Shame on you for killing so easily; long live Iranian women."

Iranian football legend Ali Daei has also been vocal in his support for the protests.

The former player and manager posted on Instagram: "My homeland Iran means: my family, my father and mother, my daughters and fellow countrymen are my brothers and sisters, I will surely stay with them forever.

"Instead of repression, violence and arresting the Iranian people, solve their problems."

Former Iranian team captain Ali Karimi has been speaking out to his 14 million Instagram followers.

He posted on the platform: "Hoping for the rebirth of our homeland Iran."