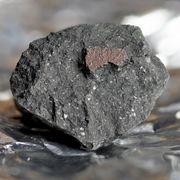 A new study of a meteorite that landed in Winchcombe has bolstered a theory regarding the origins of water on Earth.

Scientists have published their first detailed analysis of the carbonaceous chondrite meteor, which fell on the Gloucestershire town in February 2021.

The new study, published in Science Advances, shows that carbonaceous chondrites like the Winchcombe meteorite may have played a key role in delivering substances that helped form our planet’s oceans.

It called the 4.6 billion-year-old rock the "most accurately recorded carbonaceous chondrite fall".

At the time of landing, 9.54pm on 28 February last year, there were more than 1,000 eyewitness reports of the fireball, which was also captured on numerous video doorbells and dashcams.

Crash landing on to a driveway, the rock has now provided compelling evidence that water arrived on Earth from asteroids in the outer solar system.

Led by experts from the Natural History Museum and the University of Glasgow, the study found that the meteorite contained 11% extra-terrestrial water and 2% carbon, the first of its type ever to be found in the UK.

‘A glimpse back through time’

Most of the water is locked-up in minerals that formed during chemical reactions between fluids and rocks on its "parent asteroid" near Jupiter, during the earliest stages of the solar system.

Through measuring the ratio of hydrogen isotopes in the water, researchers found it closely resembled the composition of water on Earth.

Dr Ashley King of the Natural History Museum and author on the paper says: "[It is one] of the most pristine meteorites available for analysis, offering scientists a tantalising glimpse back through time to the original composition of the solar system 4.6 billion years ago."

Due to the "rapid retrieval and curation" of Winchcombe, less than 12 hours after it crashing, the meteorite is largely unmodified by the terrestrial environment. This is important as some scientists say that due to the hot temperatures of the young Earth much of the volatile content, including water, would have been driven off.

These results show that carbonaceous chondrites, which comprise about 3% of all meteorites, are a great match for explaining how ingredients needed to kickstart oceans and life on the early Earth came to be.

Dr Luke Daly, a lecturer in planetary geoscience at the University of Glasgow and author on the paper, said: "One of the biggest questions asked of the scientific community is how did we get here?

"This analysis on the Winchcombe meteorite gives insight into how the Earth came to have water – the source of so much life.

"Researchers will continue to work on this specimen for years to come, unlocking more secrets into the origins of our solar system."