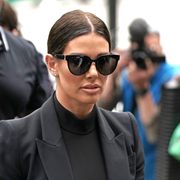 Rebekah Vardy has told the High Court she was "just joking" following an allegation she told her agent to leak a story about a female celebrity having an affair with a footballer.

The 40-year-old is currently suing Coleen Rooney after being publicly accused of leaking "false stories" to the media in 2019.

Rooney has claimed she carried out a "sting operation" to catch who was sharing stories about her private life, and named Vardy as the suspected culprit in a viral social media post.

Rooney, who is married to Derby County manager Wayne Rooney, is defending the libel claim on the basis of truth and public interest.

Vardy, who is married to Leicester City striker Jamie Vardy, took to the witness box on the second day of the "Wagatha Christie" libel trial, where she was questioned about messages between her and agent Caroline Watt.

The messages were about an alleged affair between a "well-known celebrity", referred to as Mrs F, and a footballer, identified as Mr G.

Rooney’s barrister David Sherborne told the court Vardy had sent a text to her agent, saying: "Omg have you seen how badly Mrs F is behaving x … I’m actually disgusted by her x."

She then sent another message that read: "Leak the story about her s******* G behind H’s back".

The court heard Ms Watt replied: "I tried before but The Sun already knew about it and couldn’t prove it as usual."

Asked about the messages, Vardy said she was "just joking" when she made the comment.

Key points from day two of the trial

The court also heard that Vardy told her agent she "wanted paying" for information about former Leicester City player Danny Drinkwater leaving police custody after crashing his car in 2019.

The footballer was banned from driving for 20 months and ordered to complete 70 hours of community service after pleading guilty to drink driving.

The court was told Vardy sent a message to her agent Caroline Watt to tell her that Drinkwater had been arrested.

"Danny Drinkwater arrested… Crashed his car drunk with 2 girls in it… both in hospital one with broken ribs," court documents show.

Ms Watt told Vardy that "they" would have to confirm with the police "before they write it" – Mr Sherborne said this meant The Sun, which Vardy confirmed.

Mr Sherborne said to Vardy that, despite knowing Drinkwater, she was prepared to leak a story on him – to which she replied: "Yes on that occasion because of the behaviour, I was."

‘I was just gossiping’

Questions were also raised over Manchester City footballer Riyad Mahrez, with Vardy being asked about messages she sent to Ms Watt about him not turning up to a training session in 2018.

Speaking in court, she explained: "It was speculation of just bits of information that I had heard and overheard, and also read in the press before.

"Yes, it doesn’t look good there, I was gossiping about things that were already in the public domain. I was just gossiping."

She denied an accusation her agent passed information to The Sun about fellow Leicester players’ reactions to Mr Mahrez missing the session.

Mr Sherborne went on to ask Vardy about a message exchange with Ms Watt about the model, Danielle Lloyd.

Vardy said she was referring to Ms Lloyd, her Maldives honeymoon and her miscarriage during the conversation.

Mr Sherborne said Vardy had told her agent to "leak the Maldives stuff" in relation to, what he called, the "pregnant girl leak".

Vardy claimed that her message related to a screenshotted article in a magazine about Ms Lloyd "talking about her Maldives honeymoon and her unfortunate miscarriage".

She said Ms Lloyd was "not someone in my circle", and she disagreed with her about baby "gender selection".

In 2019, an article appeared in The Sun about Rooney apparently travelling for gender selection – one of the false stories planted by Rooney that is at the heart of this case.

Another article that has already been mentioned in the trial is one relating to Rooney’s car crash in early 2019.

The court heard that Rooney had posted something on her private Instagram account about the accident and Vardy conceded that she had directed Ms Watt to look at the post.

In a message exchange, Ms Watt asked her: "Am I imagining this or did you say yesterday that Coleen had crashed her Honda?" the court heard.

"She defo has … Go in the Instagram," Mrs Vardy replied, according to court documents.

However, Vardy denied that she had any knowledge of Ms Watt "monitoring" the account.

Sitting behind Rooney at the 2016 Euros

Mr Sherborne went on to talk about an article published in the Daily Mirror in 2016 about the Euros.

He told the court Vardy had been accused of trying to gain publicity during the tournament, which took place in France, by sitting behind Rooney at a match.

Vardy branded the suggestion as "ridiculous" and claimed she was not told she would get "good photo coverage" if she sat behind Rooney.

The court has previously heard that both women have spent "hundreds of thousands of pounds" on the case so far, with the total costs of the case expected to be at least £2m.

The fake stories Rooney planted on her Instagram during the sting operation featured her travelling to Mexico for a "gender selection" procedure, her planning to return to TV, and the basement flooding at her home.

Vardy becomes emotional as court hears of trolling about her children

In the afternoon session, Mr Sherborne presented a series of interviews Vardy had given to journalists and other articles about her, mainly published by The Sun. She was "consistently" giving stories to the paper, he said.

Vardy rejected the suggestion she was building a relationship with The Sun and also denied that it was "standard practice" for her to leak private information to the newspaper via Ms Watt.

At one point she started to cry in the witness box, after Mr Sherborne brought up a story written about online abuse she had received directed at her children.

"I’m not going to take you through the trolling," he assured her, after the judge asked if she wanted a break.

Asked again a few moments later, Vardy replied: "I don’t think it’s going to make any difference, to be honest."

Vardy was also questioned about allegedly setting up a "WAGs" photo during the World Cup in Russia in 2018. However, an alarm which went off at the Royal Courts Of Justice during this line of questioning put a halt to proceedings and Wednesday’s hearing was finished early.

Vardy is expected to continue giving evidence on Thursday.