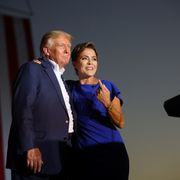 Kari Lake, who backed Donald Trump’s false claims of voter fraud in 2020, has lost her bid to become the next governor of Arizona.

The closely fought race with Democrat Katie Hobbs was one of the most significant in the US midterms as Arizona is a battleground state and is expected to play a pivotal role in the 2024 presidential election.

Ms Lake had vowed to ban the state’s mail-in voting, which conspiracy theorists falsely claim is vulnerable to fraud.

After the race was called, Ms Hobbs wrote on Twitter: "Democracy is worth the wait."

Her defeated opponent expressed disdain for the election, tweeting: "Arizonans know BS when they see it."

Her defeat capped a successful week for Democrats, who defied Republicans’ hopes for a "red wave" in the midterms.

Democrats retained control of the US Senate after keeping seats in the swing states of Arizona and Nevada, with Vice President Kamala Harris holding the tie-breaking vote.

Ms Lake, a former television news anchor, was one of a series of Trump-aligned Republican candidates who lost battleground state races.

Voters in Pennsylvania, Michigan and Wisconsin also rejected election deniers in races for governor and other statewide election posts.

Read more:
Clear message from voters to preserve democracy, Biden says
Who is DeSantis, the man who could thwart Trump?
Surge of support for Trump’s Republicans fails to take off

The Republicans are three seats away from the 218-seat majority needed to take control of the House of Representatives, according to NBC.

A Republican victory would shift the power balance away from the Democrats, who have held both the House and the Senate for the past two years.

It would allow the Republicans to hinder President Joe Biden‘s legislative agenda.