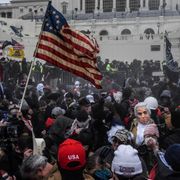 Several police officers have been suspended and at least 10 others are under investigation following the deadly riot at the US Capitol.

A member of the House of Representatives said that one of the temporarily removed Capitol Hill officers had taken a selfie with people in the mob which stormed the seat of the US legislative last week.

It comes as President Donald Trump said efforts to impeach him over the riots are causing "tremendous anger" – before adding that he wants "no violence".

The article of impeachment being prepared accuses the president of incitement to insurrection and say he made statements that "encouraged and foreseeably resulted in" the riots.

Another of the officers that has been temporarily taken off rota was seen wearing a Make America Great Again hat during the violence, and was directing rioters, according to Democrat Tim Ryan.

He said of the investigation: "The main point is the Capitol Police are looking at everybody involved that could have potentially facilitated at a big level or a small level."

Mr Ryan added that between 10 and 15 other officers were under investigation.

The acting chief of the US Capitol Police (USCP), Yogananda Pittman, said the suspensions were part of an internal investigation into what happened.

"The Department is fully engaged with our law enforcement partners throughout the National Capital Region on the Federal, state, and local levels," she said.

"The Department also has been actively reviewing video and other open source materials of some USCP officers and officials that appear to be in violation of Department regulations and policies.

"Our Office of Professional Responsibility will investigate these behaviours for disciplinary action, up to, and including, termination. Several USCP officers have already been suspended pending the outcome of their investigations."

Ms Pittman took over running the police force after Steven Sund resigned as chief over the violence, having been pressured to do so by House Speaker Nancy Pelosi.

A police officer died from injuries suffered in the riot, and police shot a woman during the violence. Three others died in what authorities said were medical emergencies.

At least 25 domestic terrorism cases have been opened in the wake of the siege and the Washington Monument was closed to the public.

Meanwhile, the FBI has warned that armed protests could take place in all 50 states ahead of President-Elect Joe Biden‘s inauguration on 20 January.