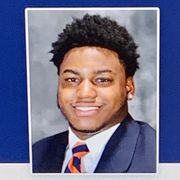 A manhunt for a student is under way after three people were shot dead and two others injured at the University of Virginia.

Christopher Darnell Jones Jr, who is suspected of carrying out the shooting in Charlottesville, has been described as "armed and dangerous", with the public told not to approach him.

The university’s emergency management issued an alert on Sunday night, notifying the campus community of an "active attacker".

The message warned students to take shelter after a report of shots fired, and multiple police agencies, including state police, started carrying out a search.

Jones is listed on the university’s athletics website as a football player in 2018, who as a first year did not participate in any games.

The victims have not been identified and it is not known whether they were students or staff.

"As of this writing, I am heartbroken to report that the shooting has resulted in three fatalities; two additional victims were injured and are receiving medical care," Jim Ryan, the university’s president, confirmed.

"This is a message any leader hopes never to have to send, and I am devastated that this violence has visited the University of Virginia. This is a traumatic incident for everyone in our community."

Classes were cancelled on Monday after the incident, and support has been made available for students and staff.

Police have continued to advise people to "shelter in place" while forces and a helicopter team keep searching for the suspect.

Read more:
How do US gun laws work and why have attempts to restrict them failed?

Officers are "conducting a complete search on and around UVA grounds at this time. Expect increased law enforcement presence. Remain sheltered in place," UVA Police tweeted.

The attack is the latest shooting on US college and school campuses in recent years.

The bloodshed has fuelled fierce debate over tighter gun control laws in the US, where the Constitution guarantees the right to bear arms.

A shooting in 2007 at Virginia Tech in Blacksburg, about 150 miles (241 km) southwest of Charlottesville, left 33
people dead, including the shooter, and 23 injured in one of the deadliest mass shooting at a university in the country’s history.