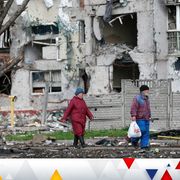 President Volodymyr Zelenskyy has warned that Russia’s invasion of Ukraine was just the beginning – and Moscow has ambitions to capture other nations.

It comes after Russian defence minister Sergei Shoigu declared that the country intends to introduce new methods of warfare, with the conflict now entering its 59th day.

The UK’s Ministry of Defence has interpreted these remarks as a "tacit admission" that the war isn’t progressing as Vladimir Putin intended.

Ukrainian authorities reported that a dozen crack Russian military units had been pulled from the Southern city of Mariupol – which is almost entirely under Russian control – to battlefields in the East of the country.

Despite this British officials believe it will take time for Russia to adapt its tactics – and for now, "there is likely to be a continued reliance on bombardment as a means of trying to suppress Ukrainian opposition".

• The UK is going to reopen its embassy in Kyiv