Ukraine war: UN stands ready to mobilise to save lives in Mariupol, chief says after ‘frank’ talks in Moscow 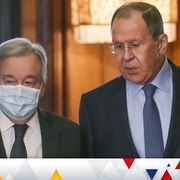 The United Nations is ready to "fully mobilise its human and logistical resources" to help save lives in the besieged Ukrainian city of Mariupol, its general secretary has said.

Speaking at a news conference with Russian Foreign Minister Sergei Lavrov in Moscow, Antonio Guterres described the port as a "crisis within a crisis".

The UN and the Red Cross – along with Russian and Ukrainian forces – should work together to enable people to leave "in any direction they choose", he suggested.

The invasion of Ukraine is a "dangerous wake-up call for the United Nations", Mr Lavrov said during the news conference.

He also alleged the UN was trying to "cross out the basic rules" of its own charter.

But Mr Guterres said that while he understood Russia has "many grievances", there is "one thing that is true and obvious and that no arguments can change".

He also denied Mr Lavrov’s allegation about the UN charter.

Antonio Guterres’s trip to Moscow came hot on the heels of incendiary comments from Sergei Lavrov about a potential escalation of the conflict, claiming Moscow is effectively at war with NATO and that the threat of a nuclear conflict "should not be underestimated".