Ukraine war: Troops at Mariupol steel plant ‘outnumbered 10 to one’ by Russians – as Zelenskyy claims Ukraine would have ‘ended the war’ with access to weapons 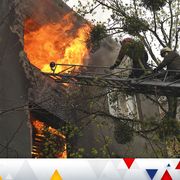 A Ukrainian marine holed up inside Mariupol’s steelworks has told Sky News that they are outnumbered 10 to one by the Russians who have encircled them.

It comes as President Volodymyr Zelenskyy vowed Ukraine would have "ended the war" by now if they had enough weapons.

Major Serhiy Volyna, who has taken on the role of spokesman for his unit, said conditions inside the Azovstal steel plant are dire but he insisted spirits remained high.

"The fighters who are protecting Mariupol continue to fight in high spirits," he said in a video message to Sky News.

"Clearly many dead and wounded…" he continued.

"More than 500 fighters need medical support, which is impossible to get here. It’s an underground shelter, so folks are rotting. But we are still functioning and continue to project people."

The Russians have said for days that they were on the cusp of gaining full control of the key port city but units of Ukrainian Marines, as well as the Azov Batallion of the Ukrainian Army, have held them back.

The metal works, thought to be an industrial site of its type in Europe, has become the location for the last stand of the Ukrainian forces in the city.

He conceded: "It is very realistic."

"The quantity of the fighters on the other side is ten times more significant. Their equipment is a lot more advised than ours. Tanks, artillery, aviation."

Asked about the civilians who have been seen in videos taken by Azov soldiers inside the steelworks, he said: "Many civilians are hiding in our bomb shelter. Among them are women with kids and babies. They also need help as they are trapped, constantly under the shelling of artillery and bombs."

A small group of civilians was able to leave the city on Wednesday afternoon, according to the Reuters news agency.

Witnesses said dozens of people boarded a small convoy of buses and departed from a planned evacuation point to Zaporizhzhia.

Mariupol city council earlier said it hoped to evacuate about 6,000 people under a preliminary agreement with Russia.

Earlier Maj Volyna told The Washington Post that his soldiers at the plant would continue "to conduct combat operations and to complete our military tasks as long as we receive them".

The mayor of Mariupol, Vadym Boichenko said, said on Wednesday that around 100,000 thousand civilians remain in the city, adding he hopes 90 buses will be sent to the besieged port city to evacuate about 6,000 women, children and elderly people.

Russia said on Tuesday that some 120 civilians living next to the Azovstal plant had been evacuated.

Russia has again given the remaining troops an ultimatum to surrender with an apparent ceasefire offer – but Sky’s Deborah Haynes, in Ukraine, says this looks set to be rejected once more.

Russia has recently started repositioning and reinforcing its troops in the east of Ukraine after failing to take control of the capital, Kyiv.

If successful, the Russian offensive, in what is known as the Donbas, would essentially slice Ukraine in two and give Russia’s President Vladimir Putin a badly needed victory.

But according to the MoD, Russia’s ability to progress continues to be affected by "logistical and technical challenges", as well as the "resilience of the highly-motivated Ukrainian armed forces".

Explainer: Where and how the battle for Donbas could be won or lost

Ukrainian commander issues what could be ‘final message’ from steel plant

One of the areas that has been targeted is the eastern city of Kharkiv, where at least four people were killed and 14 wounded during a shelling attack on Tuesday night.

Kharkiv ‘will not fall to Russia’

However, the head of Ukraine’s security service said the region will not fall into Russian hands as Ukrainian forces are more prepared for battle.

"We were able to withstand the first and scariest assault and now the whole country understands [the dangers], men are mobilised, people can and know how to fight and understand what to do," Roman Dudin said.

Read more:
• The battle for Donbas – What a Russian victory in the east would mean
• ‘I can’t lose my country now’, says commander fighting in the east
• A goodbye like no other – the families fleeing Russia’s latest push

"They [Russian forces] don’t understand that no one wants them here. Children, old people, men, women. Even ducks don’t want to see these occupiers here. So death will be waiting for them from at every corner, every opening," he added.

Kharkiv, which is the country’s second-biggest city, has come under a barrage of attacks since the war started.

The eastern city of Kramatorsk has also come under fire, with Russia claiming to have struck areas around Zaporizhzhia and Dnipro, west of the Donbas, with missiles as well.

In the devastated port city of Mariupol, which has been a key target for Putin’s forces, Ukrainian troops said the Russian military dropped heavy bombs to flatten what was left of a steel plant and hit a hospital where hundreds were staying.

Tens of thousands of residents have been trapped in the city with no access to food or water and Ukraine believes more than 20,000 civilians have died there since the war began.

Russia’s defence ministry said it has called for a ceasefire around the Azovstal plant to take place on Wednesday but claimed not a single Ukrainian soldier has accepted the proposal.

‘War would be over if Ukraine’s weapons matched Russia’s’

Late on Tuesday night, Ukraine’s President Volodymyr Zelenskyy used his daily address to warn that the Russian military is throwing everything into the battle for the eastern part of the country.

He called on the international community to provide more military assistance to Ukraine, saying if it had weapons that were "comparable" to those used by Russia, then the war would be over already.

"We would have restored peace and liberated our territory from the occupants because the superiority of the Ukrainian military in tactics and wisdom is quite obvious," Mr Zelenskyy said.

He added that the situation in Mariupol remains "unchanged" and "extremely severe", accusing the Russian army of blocking humanitarian corridors to stop civilians from escaping the city safely.

"Purposefully killing civilians, destroying residential neighbourhoods, civilian infrastructure, and using all kinds of weapons, including those prohibited by international conventions, is the Russian army’s modus operandi," the president said.

"It’s that villainy, which for generations will mark the Russian state as a source of absolute evil."

The United States, the UK and Canada have all pledged to send more military weaponry to the war-torn country, and the White House has said new sanctions are being prepared.

The move from the three countries came after a call with allied leaders to discuss the need to provide further economic and humanitarian aid to Ukraine.