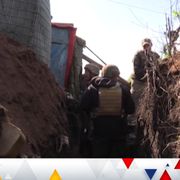 Russia appears to have taken its first city since it began a major new offensive in eastern Ukraine.

Russian President Vladimir Putin’s forces have attacked a boomerang-shaped front stretching more than 300 miles as it tries to take control of the Donbas region.

Ukraine’s President Zelenskyy said a new phase of the war was underway. The offensive had been expected for several weeks after Russia withdrew its forces from near Kyiv.

The attacks began on Monday and focused on Donetsk and Luhansk in Donbas.

The city of Kreminna has fallen to the invaders, according to Luhansk governor Serhiy Haidai. With a population of more than 18,000, it appears to be the first significant capture of the new offensive.

"Kreminna is under the control of the ‘Orcs’ (Russians). They have entered the city," said the governor.

"Our defenders had to withdraw. They have entrenched themselves in new positions and continue to fight the Russian army."

At least five people were also killed and 16 wounded in shelling in Kharkiv – in the northeast – on Tuesday, regional governor Oleh Synehubov said.

Other developments
• UK will give more artillery to Ukraine as war enters new phase, says Boris Johnson
• Russia hands over 60 soldiers and 16 civilians to Ukraine in fifth such exchange – Ukraine deputy PM
• President Biden holds video call with European allies – including UK, and NATO chief
• About seven flights of weapons heading to Europe in next 24 hours – US defence official

Russian foreign minister Sergei Lavrov said in an interview that "another phase of this operation is starting now", while a senior US official described current attacks as a "prelude" to a larger operation and said Russia was still adding reinforcements.

Russian-backed separatists are also trying to storm the Azovstal steel plant in the southeastern city of Mariupol, according to Russia’s RIA news agency.

The besieged city – where many thousands have died – is expected to fall soon as Ukraine’s last pocket of resistance there is made up of a few thousand fighters holed up at the plant.

Russia told them to surrender by noon Moscow time (10am UK time), with the defence ministry saying: "All who lay down their arms are guaranteed to remain alive."

The ministry later claimed it had opened a corridor for those who wanted to take up the offer.

Read more
Analysis: Battle for Donbas could be turning point – and it’s a battle both sides need to win

Bunker-busting bombs are reportedly being dropped on the plant, where upwards of 1,000 civilians have also taken refuge in underground shelters.

Capturing Mariupol would free up Russian troops to fight elsewhere, deprive Ukraine of a vital port, and complete a land corridor between Russia and Crimea – seized from Ukraine from 2014.

Moscow’s forces have been repositioning and reinforcing for several weeks after being thwarted in their attempt to capture Ukraine’s capital, Kyiv.

Russia has said capturing Donbas is now its main goal and that it wants to "liberate" the region.

Pro-Russian separatist fighters have been battling Ukraine’s military in the area since 2014 and there are several self-declared breakaway republics.

Capturing Donbas would give President Putin a vital area of Ukraine and a badly needed victory to present to his people amid mounting deaths and the effect of economic sanctions.

President Zelenskyy said in a message on Monday: "The Russian troops have begun the battle for the Donbas, for which they have been preparing for a long time.

"A significant part of the entire Russian army is now concentrated on this offensive.

"No matter how many Russian troops are driven there, we will fight. We will defend ourselves. We will do it every day."

‘Offensive will fail – I give you a 99% guarantee’

Oleksiy Arestovych, an aide to the Ukrainian president, has said Russia’s new offensive will fail.

He said they were trying to find "sensitive spots" in their enemy’s defences, but added: "Their offensive will fail – I give you a 99% guarantee – they simply do not have enough strength."

"The battle for Donbas, which was announced and apparently began yesterday, is underway and is going very cautiously. The battle will not go in Russia’s favour," he said on national TV.

Mr Arestovych spoke after other senior Ukrainian officials, including its security chief, said on Monday that a new phase of the war had begun.

At least seven people were also killed on Monday in the western city Lviv, near the Polish border, which has been a relatively safe haven so far.

Three military infrastructure facilities that were not in use were hit, and there was a "barbaric" attack on a civilian service station, said regional governor Maksym Kozytskyy.

Lviv’s proximity to Poland and the EU has made it a major gateway for the large amounts of weaponry donated by the West.