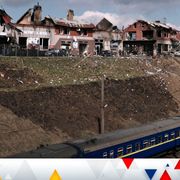 The top investigative body in Russia is looking at whether the SAS is "organising sabotage" in Ukraine.

The Investigative Committee – Moscow’s main federal investigating authority – said it would be following up on a report from Russia’s RIA Novosti news agency.

RIA quoted a Russian security source as saying about 20 members of the SAS had been deployed in the western Lviv region, close to the border with Poland.

The Investigative Committee said it would look at whether – according to the report – the SAS had been sent in to "assist the Ukrainian special services in organising sabotage on the territory of Ukraine".

The possible presence of British special forces – from a NATO country – is significant, given that Moscow has warned the West not to get in the way of what it calls its "special military operation" in Ukraine.

Information on the SAS – the Special Air Service – is often highly classified. Its operations include direct action and covert reconnaissance.

A Ministry of Defence spokesperson said: "We do not comment on special forces."

A defence source said: "We don’t comment on stories around special forces, especially ones that are being pushed out by the Russian news agencies, because inaccurate speculation can put people’s lives at risk, which is why we neither confirm nor deny reports."

A week before the Russian invasion began, the British government said it had pulled all its troops out of Ukraine, except those needed to protect its ambassador.

He also confirmed for the first time during his trade trip to India earlier this week that Ukrainian forces were in Britain.

More than 20 Ukrainian soldiers arrived last week for training on the 120 armoured vehicles that are being supplied to the resistance against Moscow, the government said.

Zelenskyy not afraid to meet Putin

During a news conference in Kyiv, President Zelenskyy said he has "no right to be afraid" of meeting Russian President Vladimir Putin "because our people have shown they have no fear".

He spoke in an underground station and had to stop at one stage to allow a train to pass.

The war can only be stopped by those who started it, he told reporters, adding that any "healthy person would choose the diplomatic way" over a military way to end the conflict.

He went on to say that foreign countries will sponsor different Ukrainian regions as part of a post-war reconstruction plan.

The head of the Russian Orthodox Church, Patriarch Kirill, officiated at the service in Moscow’s Cathedral of Christ the Saviour.

The battle for Donbas in eastern Ukraine continues to rage but Saturday also saw fresh attacks in the south, with a missile strike in the port city of Odesa.

At least five people were killed – including a three-month-old baby – and a further 18 people were injured, Ukrainian officials said.

Missiles are said to have struck a military facility and two residential buildings in the city.

Russian forces fired at least six cruise missiles, but most were shot down by Ukrainian forces, the officials said.

The Russian defence ministry said it had used high precision missiles to destroy a logistics terminal where a large number of weapons supplied by the US and European nations were being stored.