Ukraine war: Russia in for the long haul and possibly heading to ‘escalatory trajectory,’ US intel fears 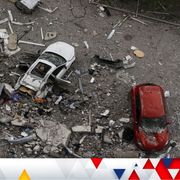 Russia appears to be preparing for a long conflict with Ukraine – and potentially heading to an "escalatory trajectory," a top intelligence analyst has said.

US Director of National Intelligence Avril Haines says even a victory in the eastern Donbas region might not end the war.

Addressing the Senate Armed Services Committee on Tuesday, she said President Vladimir Putin intended to "achieve goals beyond the Donbas" and there was concern about how things would develop in the coming months.

"We assess President Putin is preparing for a prolonged conflict in Ukraine.

"Combined with the reality that Putin faces a mismatch between his ambitions and Russia’s current conventional military capabilities …the next few months could see us moving along a more unpredictable and potentially escalatory trajectory," she added.

But a counterattack near the north eastern city Kharkiv could signal a new phase, it was believed.

According to Ukrainian troops, the settlements of Cherkaski Tyshky, Ruski Tyshki, Borshchova and Slobozhanske, in
a pocket north of Kharkiv had been recaptured in recent days.

As a result, soldiers were preparing to suspend the flow of some Russian gas to Europe through a key transit point in the area.

Kharkiv and the surrounding area has been under sustained Russian attack since early in the war.

In recent weeks, grisly pictures testified to the horrors of those battles, with charred and mangled bodies strewn in one street.

Ukraine President Volodymyr Zelenskyy confirmed his military was gradually pushing the Russian troops away from Kharkiv.

He said his troops were showing "superhuman strength" on the battlefield.

In his nightly video address, Mr Zelenskyy praised the reported territorial gains and said he was "grateful to all of our protectors who are fighting back and showing truly superhuman strength to drive off the invaders’ army."

• The US House of Representatives passed a fresh $40 billion Ukraine aid package
• Prime Minister Boris Johnson due to visit allies Sweden and Finland to discuss the ongoing conflict in Ukraine. Both are considering NATO membership in the wake of Russia’s invasion of Ukraine.
• Ukraine’s vital Black Sea port of Odesa is repeatedly bombed, including by hypersonic missiles
• Emotional scenes as Ukraine makes it through to the grand final of the Eurovision Song Contest
• UN Secretary-General António Guterres met with refugees from war-torn Ukraine in Moldova on Tuesday

Amputated limbs, no medication, no food

In Mariupol, Ukrainian fighters remained holed up at the Azovstal steel plant, denying Russia full control of the city.

Sky News spoke to Lieutenant Illya Samoilenko, who was inside.

He said they had "extremely limited resources," and firmly believed that "every day may be our last".

The soldier said: "The result of this might be… [being captured] by the enemy, which means death for us."

In recent days, the United Nations and the Red Cross have coordinated a rescue of what some officials said were the last civilians trapped at the plant.

But two officials said on Tuesday about 100 were believed to still be in the complex’s underground tunnels.

Fighters with the Azov regiment holed up inside released graphic photos of wounded comrades inside the plant, including some with amputated limbs.

They said the wounded were living in unsanitary conditions "with open wounds bandaged with non-sterile remnants of bandages, without the necessary medication and even food."

In its statement on Telegram, the regiment appealed to the UN and the Red Cross to evacuate the wounded servicemen to Ukrainian-controlled territories.

Prime Minister Boris Johnson is due to visit allies Sweden and Finland to discuss the ongoing conflict in Ukraine.

Both are considering NATO membership in the wake of Russia’s invasion of Ukraine. Finland shares a lengthy land border with Russia and is only about 250 miles from St Petersburg.

Meanwhile in the US, the House of Representatives passed a fresh $40 billion (£32.4 billion) Ukraine aid package on Tuesday which is expected to be ratified by the Senate.