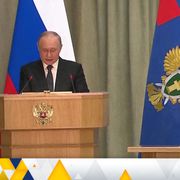 Russia’s security services have foiled a plot to kill a "famous" TV journalist, according to Vladimir Putin.

The Russian president said the plot was foiled by Russia’s main spy agency, the Federal Security Service (FSB). He offered no evidence to back up his claim.

"This morning, the Federal Security Service stopped the activities of a terrorist group that planned to attack and kill one famous Russian TV journalist," he said.

"They have moved to terror – to preparing the murder of our journalists."

Interfax News Agency said members of a nationalist group, who were allegedly acting on orders of Ukrainian spies, have been detained by authorities in Russia.

The SBU has denied the allegations, which it said were fantasies made up by Moscow.

"The SBU has no plans to assassinate V Solovyev," it said in a statement.

Mr Putin claimed the West is trying to destroy Russia from the inside, adding that the CIA was directing attempts to undermine the country and is advising the Ukrainian government.

Russia’s president also said foreign media organisations and social media had been used by the West to fabricate provocations against Russia’s armed forces. Such actions, he said, should be stopped.

In other key developments:

Earlier, US Secretary of State Antony Blinken spoke after a visit to Kyiv, where he met Volodymyr Zelenskyy.

"The strategy that we’ve put in place – massive support for Ukraine, massive pressure against Russia, solidarity with more than 30 countries engaged in these efforts – is having real results," he said.

Russia earlier warned the US against sending more arms to Ukraine, saying it would only increase the bloodshed.