Ukraine war: Russia ‘failing in its war aims’ and Ukraine will be around ‘a lot longer than Putin’, US secretary of state says 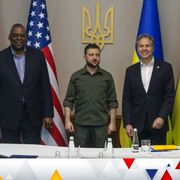 Russia is failing in its war aims after the invasion of Ukraine, US Secretary of State Antony Blinken has said after a visit to the capital Kyiv.

Speaking at a news conference on the border with Poland after meeting with President Volodymyr Zelenskyy, Mr Blinken added that a "sovereign, independent Ukraine" will be around "a lot longer than Russia’s Putin is on the scene".

"The strategy that we’ve put in place – massive support for Ukraine, massive pressure against Russia, solidarity with more than 30 countries engaged in these efforts – is having real results," he said.

Key developments:
• Ukraine has proposed talks with Russia over the fate of civilians and troops who remain in Mariupol
• No humanitarian routes were established out of Mariupol on Sunday – Ukrainian officials hope to try again on Monday
• Boris Johnson described Vladimir Putin’s actions in Ukraine as "nauseating" and "blatant aggression" during a call with UN Secretary-General Antonio Guterres
• An unspecified number of civilians were killed by Russian shelling in Ukraine’s Luhansk region on Sunday, local officials claimed
• The British defence ministry said Russia has "yet to make a significant breakthrough" after shifting its focus to the eastern Donbas region

Russian attacks continue in Ukraine, this time targeting infrastructure far from the front line, according to Ukrainian and Russian reports.

Five train stations were hit by Russian strikes in central and western Ukraine within the same hour, according to Oleksandr Kamyshin, the head of the state-run Ukrainian Railways. Casualties were reported.

Mr Blinken praised the strength of Ukrainians in the face of Russia’s attempts to "brutalise" parts of the country.

"Ukrainians are standing up, they’re standing strong, and they’re doing that with the support that we are co-ordinating literally around the world," he said.

"They can win if they have the right equipment," Mr Austin added, pledging to do "everything we can" to provide it.

He said the US wants to see Russia "weakened to the degree that it can’t do the kinds of things that it has done in invading Ukraine".

Asked about reports of weapons falling into the hands of Russian-backed forces in the Donbas region, Mr Austin said it is "difficult" for the US to track the weapons given to Ukraine.

He said Ukrainians are "focused on this issue, and they know we are concerned about it".