Ukraine war: Putin orders blockade of last Mariupol stronghold so that ‘a fly cannot pass through’ 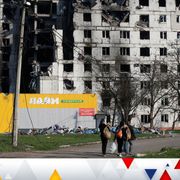 President Putin has said he wants a Mariupol steelworks that is the last stronghold of resistance in the city to be blockaded so that "a fly cannot pass through".

In a televised meeting at the Kremlin, he told defence minister Sergei Shoigu to cancel an attack on the Azovstal plant.

"I consider the proposed storming of the industrial zone unnecessary," Putin said. "I order you to cancel it."

Chechen warlord Ramzan Kadyrov claimed earlier that Russian forces would seize full control of Mariupol on Thursday after defenders warned they would be unable to "hold out for much longer".

The southern city has been bombarded by Russia since the war in Ukraine began, with thousands killed.

An estimated 1,000 civilians are still sheltering from shelling and missile attacks at the steelworks.

Mr Putin said he had decided not to storm the plant to protect the lives of Russian soldiers.

"There is no need to climb into these catacombs and crawl underground through these industrial facilities," he told Mr Shoigu.

"Block off this industrial area so that a fly cannot pass through."

Putin also called on the remaining Ukrainian fighters in Azovstal to give themselves up, saying Russia would treat them with respect and provide medical assistance.

After days of holding out against near-constant attacks, Ukrainian Marine commander Serhiy Volny warned that fighters at the plant may not be able to "hold out for much longer".

Speaking to Sky News, he said troops were "outnumbered 10 to one" and that more than 500 fighters need medical attention.

"The enemy units are dozens of times larger than ours, they have dominance in the air, in artillery, in ground troops, in equipment and in tanks," he said.

Kadyrov, the head of the Russian republic of Chechnya, whose forces have been fighting in Ukraine, insisted Mariupol would fall today.

"Before lunchtime, or after lunch, Azovstal will be completely under the control of the forces of the Russian Federation," he said.

​​​​​​The fall of the city would mark Moscow’s biggest victory of the war so far.

On Wednesday, the situation in Mariupol became so desperate that Ukraine’s president, Volodymyr Zelenskyy, proposed swapping Russian prisoners of war for a humanitarian corridor to allow civilians to leave the city safely.

Ukraine is ready for a "special round of negotiations" with no conditions "to save our guys, Azov [battalion], military, civilians, children, the living and the wounded", Ukrainian negotiator Mykhailo Podolyak said.

Read more:
Russia tests missile capable of evading ‘any defence system’
Why is Russia focusing on the east?

Four evacuation buses carrying around 80 civilians from Mariupol left the city on Wednesday.

More than five million people have fled the country since war broke out, but it is believed that tens of thousands are still trapped inside Mariupol with little food, water or access to medical supplies.

Russia is continuing its new offensive to take control of the eastern part of the country, what is known as the Donbas region.

Missiles and artillery struck 1,001 military targets in Ukraine overnight, including 162 firing positions, the country’s Ministry of Defence said on Thursday.

The mayor of Ukraine’s second largest city, Kharkiv, has said it has come under intense bombardment.

Russian forces and Russian-backed separatists have also taken full control of the town of Kreminna in eastern Ukraine.

The governor of Luhansk has claimed Russian forces now control 80% of his region.

Serhiy Haidai said Kremlin troops are now threatening the cities of Rubizhne and Popasna after taking control of Kreminna.

Before Russia’s invasion, the Kyiv government controlled 60% of the Luhansk region – one of two areas that make up the Donbas.

"The occupiers control only parts of these cities, unable to break through to the centres," Mr Haidai said on the messaging app Telegram.

Analysts have said the offensive in the east could become a war of attrition as Russia faces Ukraine’s most experienced troops, who have fought pro-Moscow separatists in the Donbas for eight years.

Brit prisoners ‘being taken care of’

"Don’t worry, the Russian side is taking care of them. They are fed, watered, and given the necessary assistance. Just like other foreigners who have surrendered or been detained," foreign ministry spokeswoman Maria Zakharova said.

On Monday, two British fighters captured in Ukraine by Russian forces appeared on Russian state TV and asked to be exchanged for a Ukrainian ally of President Vladimir Putin.

Shaun Pinner and Aiden Aslin asked to be swapped for Viktor Medvedchuk, who is being held by the Ukrainian authorities.