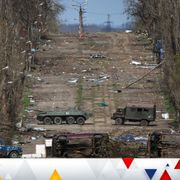 A Russian general has said Moscow wants to seize all of southern and eastern Ukraine as he revealed plans of a new phase of the invasion.

Forces would then link up with the Crimea peninsula and capture Ukraine’s entire south as far as a breakaway Russian-occupied region of Moldova.

Ukraine has said the comments prove Russia was lying when it said it had no "territorial ambitions" on launching the invasion.

"They stopped hiding it," Ukraine’s defence ministry said on Twitter.

It added the plans meant Russia had "acknowledged that the goal of the war is not victory over the mythical Nazis, but simply the occupation of eastern and southern Ukraine. Imperialism as it is".

Read more:
What are Russia’s plans for its ‘second phase’ – and why does it include Moldova?

Despite these comments, Russia’s chief negotiator has claimed "several long conversations" took place with the head of Ukraine’s delegation on Friday.

Vladimir Medinsky gave no details of these lengthy talks, thought to be held in a bid to negotiate a ceasefire after weeks of war.

Earlier this week, the Kremlin said Russia had submitted a new written proposal for peace, but Ukrainian President Volodymyr Zelenskyy said he had neither seen nor heard about it.

Iryna Vereshchuk told Sky News only a fraction of those expected to be evacuated on Thursday made it out.

"The mission is not accomplished. We opened the green corridor for thousands of people. And we expected at least 5,000 people. But we have only 79 people. This is what Russia does."

Meanwhile, newly released satellite images show what appear to be mass graves dug around the southern port city – holding the bodies of thousands of civilians.

The photographs, taken by satellite imaging firm Maxar Technologies, reportedly depict more than 200 mass graves dug in long rows stretching away from an existing cemetery in the town of Manhush, about 20km west of Mariupol.

Locals accuse Russians of burying up to 9,000 civilians there – in an effort, they say, to conceal the slaughter.

Mariupol’s mayor Vadym Boychenko labelled Russian actions in the city as "the new Babi Yar", a reference to the site of multiple Nazi massacres in which nearly 34,000 Ukrainian Jews were killed in 1941.

"The bodies of the dead were being brought by the truckload and actually simply being dumped in mounds," an aide to Mr Boychenko, Piotr Andryushchenko, said on the Telegram messaging service.

The images emerged just hours after Russian President Vladimir Putin claimed victory in the battle for Mariupol, despite the presence of an estimated 2,000 Ukrainian fighters holed up at the Azovstal steel mill.

Mr Putin ordered his troops to seal off the stronghold "so that not even a fly comes through", instead of storming it.

War photographer Max Clarke, who visited Mariupol this week, told Sky News the situation in the city is "getting worse" and dead bodies are being "chucked into craters" left by Russian airstrikes.

Mr Clarke also described how one street he visited near the Azovstal steel plant, where Ukrainian forces are now holed up, had "maybe 80 bodies" left there.

"Some of them are so decomposed and they’ve been there for so long it looks like dogs or birds have been eating their faces and the only thing that remains is their gold teeth and their blackened skin from the artillery strikes," he said.

Read more
‘Everything is destroyed’ – the hell of Mariupol onslaught
Why is Mariupol so important to both sides?

Russia has said it is willing to hold a ceasefire to allow Ukrainian troops at the steel works to leave.

Moscow says it is prepared to stop firing to allow for people to flee, should Ukrainian defence forces lay down their arms.

It said the ceasefire would start with the "raising of white flags" by Ukraine.

Similar proposals have been made by Russia in recent days, all of which have been ignored by Ukrainian troops holed up at the site.

The capture of Mariupol would represent the Kremlin’s biggest victory yet of the war in Ukraine.

It would help Moscow secure more of the coastline, complete a land bridge between Russia and the Crimean Peninsula, which Russia seized in 2014, and free up more forces to join the larger and potentially more consequential battle now under way for Ukraine’s eastern industrial heartland, the Donbas.

And on Friday, Russia’s military said gaining control of Ukraine’s southern region will provide them with another gateway to Transnistria in Moldova.

In other developments, Boris Johnson said Britain is looking to send tanks to "backfill" in Poland so Soviet-era T72s – with which Ukrainian crews are familiar – can be released to the government in Kyiv.

The prime minister also said the improving security situation around Kyiv means Britain will be able to reopen its embassy there next week.

The United Nations human rights office sounded the alarm on Friday about growing evidence of war crimes in Ukraine.

It has urged both Moscow and Kyiv to order combatants to respect international law.

Monitors in Ukraine have also documented what appeared to be the use of weapons with indiscriminate effects, causing civilian casualties, by Ukrainian armed forces in the east of the country, OHCHR said in a statement.

And Pope Francis has suspended plans to meet the head of the Russian Orthodox Church and longtime ally of President Vladimir Putin, according to the Argentine newspaper La Nacion.