Ukraine war: Finland to apply to join NATO for the first time amid Russia’s ongoing invasion 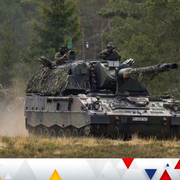 Finland’s president has said the country needs to apply to NATO "without delay" as the Russian invasion of Ukraine continues.

Responding to Finland’s announcement this morning, the Kremlin said that the move to join NATO will not help stability and security in Europe, adding it will be "definitely" a threat to Russia and it would be forced to take retaliatory steps.

The foreign ministry claimed that NATO’s aim was to continue expanding towards Russia’s borders, in order to create another flank for military threat to the country.

Kremlin’s spokesman Dmitry Peskov added the steps taken by Finland to join NATO were a cause for regret and a reason to impose a symmetrical response.

He also said Russia is prepared to give the most decisive response to any side which tries to get involved in Ukraine and hinder the special military operation.

Mr Peskov: "Everything (further action by Russia) will depend on how this process of expansion will look like in the future, how far the military infrastructure will move, how much closer to our borders.

"Of course, if you remember the current instruction of the (Russian) president and the commander-in-chief, to develop a list of measures to strengthen our western flanks in connection with the strengthening of NATO’s eastern flank, that is, NATO is moving in our direction, so, of course, all this will become elements for a special analysis and development of necessary measures, in order to balance the situation and ensure our safety."

It comes after Finnish president Sauli Niinisto made the announcement as he said the country, which shares an 810-mile border and a difficult past with Russia, must apply for membership to the organisation.

In a joint statement with the country’s prime minister Sanna Marin, they said: "We hope that the national steps still needed to make this decision will be taken rapidly within the next few days.

"Now that the moment of decision-making is near, we state our equal views, also for information to the parliamentary groups and parties.

"Finland must apply for NATO membership without delay."

NATO’s Jens Stoltenberg later said Finland would be welcomed if they decide to join, adding the accession would be "smooth and swift".

Since Russia annexed Crimea in 2014, Finland has increased its co-operation with NATO as one of its "partner" nations.

But it has not actually joined in order to maintain good relations with its eastern neighbour.

The government and parliament in Finland is expected to give approval to the decision shortly.

The announcement by Mr Niinisto and Ms Marin means Finland is virtually certain to seek NATO membership, though a few steps remain before the application process can begin.

Neighbouring Sweden is expected to decide on joining NATO in the coming days.Last month, Mr Niinisto – who heads foreign policy in the country in co-operation with the government – told newspaper Ilta-Sanomat: "If it happens as it looks likely that Finland and Sweden will join (NATO), then it will create a new kind of North for us, one that is responsible, stable and strong."

Support for joining NATO in the country has changed rapidly since Russia launched its so-called "special operation" in Ukraine – with the latest poll by public broadcaster YLE showing 76% of Finns in favour and only 12% against.

‘Countries are taking steps to ensure they are protected’

The Prime Minister’s official spokesperson told reporters this afternoon: "Obviously, they are now in the early stages of democratic consultations and we fully support and welcome that NATO is a defensive organization. And we support 100% any country’s democratic wish to join.

"I think it shows how democratic countries are further joining together as a direct consequence of Putin’s illegal invasion.

"It shows and only further illustrates the futility of the actions that he has taken and that he is not achieving by any measure, his aims, not least of which is reported on to push back on NATO.

"The only aggression that actually was enacted was the illegal invasion. I think we are seeing countries taking steps to ensure that they are protected and working more closely with other like-minded democratic countries."

It comes after the UK agreed defence pacts with both Finland and Sweden.

The agreements say the UK will come to the aid of both countries if they are attacked, and vice-versa.

The Kremlin earlier warned of "military and political repercussions" if Sweden and Finland decide to join the alliance but Mr Johnson made clear he would back Sweden’s accession.