Ukraine war: Finland expected to announce NATO bid – as both sides in Ukraine conflict are accused of using cluster bombs 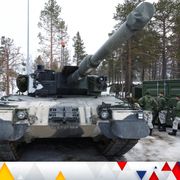 Finland is today expected to say it wants to join NATO, in a major shift of security policy.

Finland, which shares an 810-mile border and a difficult past with Russia, has gradually stepped up its cooperation with NATO as one of its ‘partner’ nations since Russia annexed Crimea in 2014.

But it has held back from actually joining in order to maintain friendly relations with its eastern neighbour.

However, today President Sauli Niinisto is expected to announce their formal intention to apply. The government and parliament are expected to also give their approval.

Finnish support for joining NATO has risen to record numbers over recent months, with the latest poll by public broadcaster YLE showing 76% of Finns in favour and only 12% against, while support for membership used to hover at only around 25% for the years prior to the war in Ukraine.

The news comes after the UK agreed defence pacts with both Finland and Sweden.

Prime Minister Boris Johnson visited Stockholm and Helsinki to sign the agreements, which say the UK will come to the aid of both countries if they are attacked, and vice-versa.

Sweden’s ruling Social Democrats are expected to decide on 15 May whether to overturn decades of opposition to NATO membership, a move that would almost certainly lead to Sweden also asking to join the 30-nation alliance.

• Moscow has begun imposing sanctions of its own – with restrictions placed on owners of gas pipelines
• UK Defence Secretary Ben Wallace met with his US counterpart Lloyd Austin at the Pentagon for talks on "the next steps" in Ukraine and to discuss the importance of transatlantic cooperation.
• New report from Human Rights Watch claims both Russia and Ukraine have used indiscriminate cluster munitions in the conflict

Ukraine has offered to release Russian prisoners of war in exchange for the safe evacuation of the badly injured fighters trapped inside a steel mill in the ruined city of Mariupol.

Deputy Prime Minister Iryna Vereshchuk said on Wednesday that negotiations were under way and that there were different options, but "none of them is ideal".

These negotiations are happening while the country’s top prosecutor has disclosed plans for its first war crimes trial of a captured Russian soldier.

General Iryna Venediktova said her office had charged Sergeant Vadin Shyshimarin, 21, in the killing of an unarmed 62-year-old civilian who was allegedly gunned down while riding a bicycle in February, four days into the war.

Shyshimarin, who served with a tank unit, is accused of firing through a car window at the man in the north eastern village of Chupakhivka.

Venediktova said the soldier could be sentenced to up to 15 years in prison.

On the battlefield, reports are emerging of more pushback of Russian forces in a Ukrainian counterattack that could signal a shift in the momentum of the war.

Ukraine’s armed forces’ general staff said it had recaptured Pytomnyk, a village on the main highway north of the
second largest city of Kharkiv, about halfway to the Russian border.

However, the southern port town of Mariupol continues to take a pounding and Ukrainian officials have issued dire warnings about civilians and the last fighters after weeks of Russian bombardment which the city’s mayor said had turned it into a "medieval ghetto".

See more:
The pounding of Azovstal – pictures that tell a thousand words

Russia tries its own sanctions

Moscow has reportedly begun imposing more sanctions of its own – with restrictions placed on the owner of the Polish part of the Yamal pipeline that brings Russian gas to Europe.

It is also applying them to the former German unit of the Russian gas producer Gazprom, whose subsidiaries service Europe’s gas consumption.

But Germany’s Economy Minister Robert Habeck, in turn, said it may be able to cope with a boycott of Russian gas imports as soon as the coming winter.