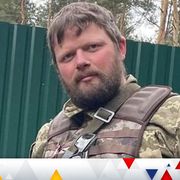 A 36-year-old British Army veteran was killed while on active service with the Ukrainian army after sustaining fatal injuries, an inquest has concluded.

Scott Sibley, from Immingham, North Lincolnshire, died on 22 April after his position in southern Ukraine came under attack from heavy artillery shelling.

Senior coroner Darren Salter said the father-of-three was "killed while on active service with the Ukrainian army".

Mr Sibley travelled to join the frontline on 13 March, travelling from Manchester to Poland before crossing the border into Ukraine.

The former soldier joined the International Brigade of Ukraine and was fatally injured after "volunteering" for a sniper mission while defending the southern Mykolaiv region.

The inquest heard that Mr Sibley had spent three days in a foxhole but as the team was due to be relieved, a drone was seen overhead with heat-sensing equipment.

Moments later, they came under attack from heavy artillery shelling, and the foxhole was compromised.

Mr Sibley ran to take cover, but he was struck by mortar fire.

A post-mortem examination confirmed Mr Sibley sustained "penetrating fragment injuries" to the chest and abdomen as a result of the detonation of an explosive device.

The injuries would not have been survivable, even with medical intervention, the coroner said.

A forensic pathologist concluded "there is nothing that could have been done to have saved his life".

Mr Sibley’s mother, Marie Sibley, said he took on the "role of protector" at a young age, in a statement read to the inquest.

She added that as a teenager he joined the air cadets and was always "helping where he could", before joining the army.

Mrs Sibley said: "He had heard news about women and children being abused. He wanted to help.

"He knew Ukraine was requiring assistance, especially from those with military experience, which Scott had.

"While in Poland, Scott would make contact via a family WhatsApp group so we would know he was safe.

"He said he had made some good friends and he was fine. He was pleased to be helping.

"He was in his element and likened it to his Afghan tours. This was the last communication we had with Scott.

"Scott would do anything to help anyone. He had a good heart, and was a good person."

A Ukrainian death certificate was issued for Mr Sibley on 25 April before his body was repatriated to the John Radcliffe Hospital in Oxford on 24 May.

He was formally identified by dental records, and a distinctive tattoo on his left shoulder.