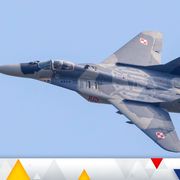 Western allies must "double down" on support for Ukraine with both heavy weapons and air power, Foreign Secretary Liz Truss has said.

In a keynote foreign policy speech, Ms Truss said the international architecture intended to guarantee peace and prosperity had failed Ukraine in the face of an attack by a "desperate rogue operator" and now Kyiv must be given what it needs "to push Russia out".

Speaking at Mansion House in London, she said: "The war in Ukraine is our war – it is everyone’s war because Ukraine’s victory is a strategic imperative for all of us.

"Heavy weapons, tanks, aeroplanes – digging deep into our inventories, ramping up production. We need to do all of this."

NATO nations have supplied Ukraine with military supplies including missiles and armoured vehicles. But so far they have been reluctant to send fighter planes for fear of escalating the conflict.

She appeared to address this by saying: "Some argue we shouldn’t provide heavy weapons for fear of provoking something worse.

"But my view, is that inaction would be the greatest provocation. This is a time for courage not for caution."

Her speech came after a 63rd day of fighting, which saw Kherson particularly badly hit.

At one point, Russian television channels were knocked off-air following a series of explosions in the southern city which has been occupied by Russian troops since early in the war.

Its state news agency RIA Novosti said missiles and rockets were fired from the direction of the Ukrainian forces to the northwest.

Ukrayinska Pravda, an online newspaper, said the strikes set off a fire and knocked the Russian channels – which began broadcasting from Kherson last week – off the air.

Meanwhile, President Vladimir Putin warned of "lightning fast" retaliation against any country that interferes in the conflict.

In an address to the Council of Legislators in St Petersburg, the Russian leader said "all the objectives will definitely be carried out" in the Ukraine war.

He said: "If someone intends to interfere in what is going on from the outside they must know that constitutes an unacceptable strategic threat to Russia.

"They must know that our response to counter-strikes will be lightning-fast."

He also vowed the goals of his military operation in Ukraine will be achieved.

"I want to emphasize again that all the tasks of the special military operation we are conducting in the Donbas and Ukraine… will be unconditionally fulfilled," he said.

There are growing concerns for some 100,000 civilians still living in the besieged city of Mariupol.

Following a meeting between UN Secretary-General António Guterres and President Putin it has been agreed in principle that the United Nations and the International Committee of the Red Cross should be involved in the evacuation of civilians from a besieged steel plant in the south eastern city.

UN spokesperson Stephane Dujarric said that during their one-on-one meeting, Guterres and Putin "discussed the proposals for humanitarian assistance and evacuation of civilians from conflict zones, namely in relation to the situation in Mariupol."

The sprawling Azovstal steel plant has been almost completely destroyed by Russian attacks but it is the last pocket of organized Ukrainian resistance in Mariupol.

An estimated 2,000 troops and 1,000 civilians are said to be holed up in bunkers underneath the wrecked structure.