Ukraine war: A goodbye like no other – the families fleeing Russia’s latest push 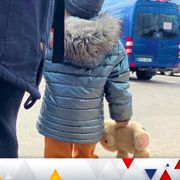 Mykolaiv has been without running water for a week. Now another Russian missile has bent an electricity pylon to a 60-degree angle, no doubt cutting many people’s electricity supply.

The damage to Ukraine‘s infrastructure from the war is already estimated to have cost $100bn (£77bn).

The ministry for infrastructure says 300 bridges have been damaged or destroyed, 8,000km (nearly 5,000 miles) of roads need repairing along with dozens of railway bridges.

But the human cost is incalculable, and the steady bombing of the city of Mykolaiv is taking its toll.

No one was killed in this latest blast, which also smashed commercial properties, but there are currently nearly 300 people in Mykolaiv’s hospitals being treated for wounds caused by Russian attacks in the region.

Many families have decided it is time to leave.

Olena Sigeti and her family wait in a car park for a bus that will take refugees to Moldova and then on to other European countries.

She says: "It’s too dangerous to be here. In the district we are living in, we can hear echoes of active fighting. Unfortunately, we’ve decided to leave. It’s unbearable. You can’t express it in a couple of words. We were born here. We live here."

Alongside the Russian military’s push in the east, they are also building up troops on the western front in the south and are expected to try to push along the coast into Mykolaiv.

Analysis: The battle for Donbas could be a turning point – and it’s a battle both sides need to win

The Kolegina family arrive at the car park in a dirt-covered van which had carried them from the Russian-occupied area 40km (25 miles) away in Chornobaivka.

"There are Russians there now," says mum Anna Kolegina. She describes life living in a house with walls that were cracking from the nearby explosions, the whole family sleeping in the basement. The adults only left home to buy food.

She says: "There are shellings every day. They are going house to house. That’s why we took our children and decided to move to a safer place."

Salam Alden, founder and chief executive officer of Team Humanity which organises the buses to Moldova, told Sky News: "You see it’s all women and children, look at them. They didn’t do anything wrong. They didn’t hurt anyone.

"They need to leave their country, their homes, their families, their fathers, their husbands, their brothers."

It’s true that while women and children are able to leave, their husbands and sons are often on, or preparing to go, to the frontline. Tears flow as the families say their final farewells.

Natasha Sigeti’s husband has been training with the military for three weeks and is nearly ready to go to the frontline.

Preparing to board the bus for Moldova, she says: "It’s really stressful. We don’t want to leave. But today where there were many explosions near our district and that’s when we finally decided to leave."

Her friend, Ulyana Veckman, adds: "Plus, my husband is going to defend the country – and her husband as well."

Many don’t know how far they are going or for how long. Or what will be here for them if they ever come back.