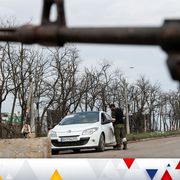 Russia has shifted a dozen crack units from the shattered port of Mariupol, redeploying them on the eastern battlefront, as Ukraine said it managed to bring supplies to the city’s besieged Azovstal steel works.

It comes as a Ukraine presidential adviser said Russian forces were trying to conduct operations to storm the area, which is the last stronghold of Ukrainian troops in the ruined southern city.

The adviser said Russia has resumed airstrikes on the site.

While Russia claims to have "liberated" Mariupol, the latest UK military intelligence suggests Russian troops have made no major gains in the country in the last 24 hours, with Ukrainian counter-attacks continuing to hinder their progress.

And Ukrainian authorities said the two sides are hurtling towards what could be a major fight for control of the country’s industrial heartland.

President Putin has ordered a blockade of the Azovstal facility so tight that a "fly can’t get through" and his troops are keeping Ukrainian forces pinned there.

Mr Danilov said the main battles in the country are taking place in the Donbas region, the industrial heartland in the east, with Russia deploying more and more troops every day.

Heavy fighting continues to frustrate Moscow’s attempts to fully capture Mariupol and impedes their progress in the Donbas.

Overnight, President Volodymyr Zelenskyy warned that Russia’s invasion of Ukraine was just the beginning – and Moscow has ambitions to capture other nations.

It comes after Russian defence minister Sergei Shoigu declared that the country intends to introduce new methods of warfare, with the conflict now entering its 59th day. UK military intelligence suggested this was a "tacit admission" that the war is not progressing as Vladimir Putin hoped.

But despite this, British officials believe it will take time for Russia to adapt its tactics – and for now, "there is likely to be a continued reliance on bombardment as a means of trying to suppress Ukrainian opposition".

Moldova’s foreign ministry has summoned Moscow’s ambassador to express "deep concern" about these comments, which suggested the country’s Russian-speaking population was being oppressed.

"These statements are unfounded," the foreign ministry said on its website.

"Moldova … is a neutral state and this principle must be respected by all international actors, including the Russian Federation."

Another video claimed to show the main building of the Azovstal steel plant in flames.

An estimated 2,000 Ukrainian troops remain holed up in the huge complex – vastly outnumbered by Russian forces – alongside 1,000 civilians.