Twitter in talks with Elon Musk about his takeover plan 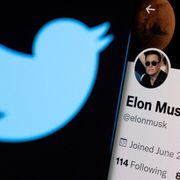 Twitter is in talks with Elon Musk about his plan to take over the company amid growing expectations the social media platform will agree a price with the billionaire.

Twitter’s board and Mr Musk negotiated into the early hours of Monday over his bid to buy the platform, The New York Times reported, and shares were up 4% in early trading as speculation on a deal mounted.

The world’s richest man has offered to buy the social network for $43bn (£33.5bn) – and has accused the company of failing to uphold free speech.

Twitter recently adopted a "poison pill" strategy in an attempt to resist a hostile takeover, but some investors want the tech giant to seriously consider his offer.

According to Reuters, some shareholders wanted Twitter to seek a better deal from Musk – urging it not to let this opportunity slip away.

Musk previously described his offer of $54.20 per share as "best and final" – but given the social network is set to release quarterly results on Thursday, Twitter’s board may argue that this price is too low.

Beyond encouraging the Tesla CEO to sweeten his offer, other options for the company include attracting bids from rivals.

One fund manager invested in Twitter told Reuters: "I wouldn’t be surprised to wake up next week and see Musk raise what he called his best and final offer to possibly $64.20 per share."

Musk argues that the social network needs to be taken private in order to grow and become a genuine platform for free speech.

The billionaire also wants to tackle other issues facing the social network, such as the proliferation of bots who distribute spam messages.

And he’s pondered adding new features including an edit button, as well as reducing Twitter’s reliance on advertising and allowing longer tweets to be posted.

Twitter’s stock was trading at $48.93 as of Friday’s close on Wall Street, meaning Musk’s offer represents a 10% premium on that price.

Some hedge funds believe it amounts to a good deal – and argue that concerns over inflation and an economic slowdown mean that Twitter’s stock is unlikely to be worth more than $54.20 any time soon.

But long-term shareholders argue that Twitter is worth much more – and just six months ago, the stock was trading at $62.11.

In other developments, the Wall Street Journal has reported that Twitter is re-examining Musk’s offer – not least because the billionaire now has financing for a deal.

According to the media outlet, both sides met on Sunday to discuss the proposal – and the social network "is more likely than before to seek to negotiate".

Musk has also met privately with several Twitter shareholders to highlight potential benefits of his takeover.