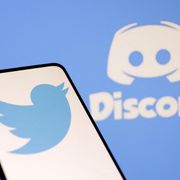 His Majesty’s Treasury has opened a Discord account on the instant messaging platform and been subjected to a tidal wave of abuse.

The government department’s official Twitter account posted a link to its server on the chat app on Tuesday, though it has apparently been active since 14 October.

Despite the Treasury blocking all comments on the platform, which is mainly popular with gamers, users have been inventive, using emojis and their usernames to mock the government, the Conservative Party and Chancellor Jeremy Hunt.

Emojis can be used to react to posts, which has led to a large number of aubergines, middle fingers, trans flags and EU flags appearing in the chat. Letter emoji responses have also seen many users posting an offensive misspelling of Mr Hunt’s surname.

As well as the emoji reactions, users joining chats get a welcome message including their username, which has prompted a flood of messages from people who have made up a username such as: "Welcome, LOCK UP PRINCE ANDREW. We hope you brought pizza"; "F*** THE TORIES just into the server"; and "margaret thatcher just showed up".

Discord has a community focused approach where users join servers dedicated to discussing things like video games, films and podcasts or specific interests and issues.

It is unclear why the Treasury has opened the account, but it could be related to the uncertainty around Twitter since Elon Musk’s takeover.

Discord is also popular among day traders and cryptocurrency enthusiasts, which could be another reason for opening the server.