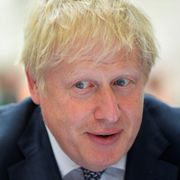 Tory backbenchers are pushing for tax cuts after Boris Johnson was said to have shown "more than a bit of ankle" on doing so to address the cost of living crisis.

Jake Berry, the Conservative MP who leads a group of Tories representing northern constituencies, said it was "now or never" for Mr Johnson to act to address the squeeze on household budgets.

Sky News revealed earlier that the PM told MPs who attended a garden party in Downing Street that he thought cutting taxes was the way to address the crisis.

Mr Johnson had told the House of Commons on Tuesday that he and chancellor Rishi Sunak would be "saying more about this in the days to come" – but the Treasury immediately made clear there would be no emergency budget.

Michael Gove, the levelling up secretary, told Sky News on Wednesday that the prime minister’s words had been "over interpreted" though did claim the government "will be saying more and doing more to help people".

Mr Berry said action was needed now if the party is to continue to be seen as "the new party of the north" – where Conservatives won a swathe of former Labour strongholds in the 2019 general election.

He told Sky News: "That is why we are working with the PM and other government ministers to find ways we can help alleviate some of these cost pressures."

Asked if that meant Boris Johnson would bring forward tax cuts soon, he said: "I think the prime minister is listening to colleagues and he’s certainly beginning to show more than a little bit of ankle in this area."

"It’s kind of now or never for the prime minister on the cost of living question.

"People vote for change when they don’t feel good about their own family situation and I think that’s where we’re getting to with the challenges seen to family budgets – so the prime minister’s got to act, he’s got to act now."

David Davis, the former cabinet minister, said he was in favour of cutting taxes whether it was described as an emergency budget or not.

The MP told Sky News: "I don’t care what you call it, what I want to see is either a significant reduction in taxes – or preferably a reversal of the increase in national insurance.

"And I would add to that, frankly, the abolition of VAT on fuel.

"It should be done before the summer, I think. As soon as we possibly can, in truth."

The comments come at a time when households are being squeezed by inflation, which has soared to a three-decade high and is forecast to climb further in the autumn, while economic growth is expected to go into reverse.

That combination of a stagnating economy at the time of high inflation prompted Labour leader Sir Keir Starmer to accuse Mr Johnson of being "bereft of ideas" as the nation heads towards a "stagflation crisis".

A Downing Street spokesman said on Wednesday that, during a meeting of the government’s new cost of living committee, the PM had "urged ministers to go faster and be as creative as possible in ensuring the government is doing everything on this important issue".

The spokesman added: "In the days to come you will hear more from the prime minister on this.

"The chancellor and the prime minister are working extremely closely on this and will continue to do so."

At a news conference in Finland, the PM said that "of course, there will be more support in the months ahead".