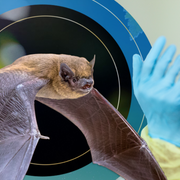 Scientists expect 15,000 transmissions of viruses between different species by 2070, mostly driven by bats moving to new areas in a hotter world.

An ever warmer climate will drive many animal species into new locations, taking their parasites and pathogens with them, and "increasing the risk of emerging infectious diseases jumping from animals to humans in the next 50 years," scientists forecast.

As they move, some species will start to come into contact with each other for the first time. But the danger will be greatest in densely populated areas, especially tropical Africa and southeast Asia.

Peer-reviewed journal Nature, which published the study, believes it to be among the first to assess how global changes could create "future hotspots" for virus sharing and emerging diseases.

The researchers, led by Colin Carlson from Georgetown University, modelled the way mammals might move as the world warms by 2 degrees Celsius by 2070, as their current habitats become too hot.

They expect at least 15,000 new transmissions of viruses between species, driven mostly by bats, which often carry viruses that are highly likely to be passed on to humans.

The World Health Organisation (WHO) believes the 2020 novel coronavirus outbreak in Wuhan likely transmitted from a bat to humans via an intermediate species.

Scientists and governments around the world agree the world should seek to limit warming to 1.5 degrees above pre-industrial levels, to avoid the worst climate breakdown – although some impacts will still hit. But current policies, if implemented, set the world on course for around 1.9 degrees of warming.

A key aim of last year’s COP26 climate summit in Glasgow was to "keep 1.5 alive" by getting countries to review and ramp up their climate action plans by the next summit, COP27 in Egypt in November this year.

Before the Paris climate accord was agreed at COP21 in 2014, the world was on track to heat up nearly 4 degrees.