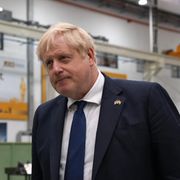 Boris Johnson "should be long gone", a senior Tory backbencher has declared during a key parliamentary debate on partygate.

Steve Baker had only two days ago offered the prime minister his backing after he apologised in the Commons following his fine for breaking lockdown rules.

Mr Baker revealed his change of heart as MPs discussed whether to order an investigation into whether the prime minister misled them over partygate.

Politics live: Surprise U-turn ahead of debate on partygate inquiry

Shortly before the debate, the government dropped its bid to delay the vote – which was brought by Labour and supported by other opposition parties.

Mr Baker said he believed that Mr Johnson’s "marvellous contrition… only lasted as long as it took to get out of the headmaster’s study".

"I have to acknowledge that if the prime minister occupied any other office of senior responsibility… he would be long gone," he said.

Labour has tabled a motion to refer Mr Johnson to the privileges committee over his initial claims that no lockdown rules had been broken.

Conservative MPs had earlier been told to support an amendment delaying a vote on such a motion until after separate investigations by the police and civil servant Sue Gray.

Education Secretary Nadhim Zahawi, speaking to Sky News, predicted that Tory colleagues would back that move, describing it as "the right thing to do".

But Conservative members were later told they would have a free vote – and the amendment has been dropped.

A spokeswoman for the PM said Mr Johnson had been involved in the decision, adding: "We are now content that any parliamentary process would take place after both the Met investigation and after the Sue Gray report had been published."

But Labour said it was "humiliating" for the Conservatives.

Earlier, the prime minister – speaking on a visit to India – urged MPs to wait until they have "the full facts" and for investigators to "do their stuff and then knock this thing on the head".

He has also vowed to fight the next election as Tory leader.

PM ‘covered up his misdeeds’ – Starmer

Sir Keir Starmer, tabling the motion to order a parliamentary investigation, said Mr Johnson had "stood at the despatch box and point-blank denied rule breaking took place – when it did".

"As he did so he was hoping to gain extra protection from our good faith, that no prime minister would ever deliberately mislead this House," Sir Keir added.

"He’s used our faith, our conventions, to cover up his misdeeds.

"After months of denials, of absurd claims that all the rules were followed, of feigned outrage at his staff discussing rule breaking, we now know the law was broken.

William Wragg, a Conservative MP who has previously described the PM’s position as untenable, told the Commons: "Much as I may have tried, I cannot reconcile myself to the prime minister’s continued leadership of our country and the Conservative party."

He said it was "utterly depressing to keep being asked to defend the indefensible".

SNP leader Ian Blackford said: "The prime minister of the United Kingdom is a liar. I genuinely don’t say that lightly and I don’t say it loosely."

Pressure on Mr Johnson over partygate has resumed since he was fined last week for attending a gathering on his birthday in June 2020 – in breach of lockdown laws.

He is also thought to have attended some of the other 12 events in Downing Street and Whitehall in 2020 and 2021 being investigated by the Metropolitan Police.

In a recent update on the investigation, the Met said it had referred more than 50 fixed penalties to be issued.

Scotland Yard said on Thursday that it would not be providing further updates on the probe until after local elections on 5 May.