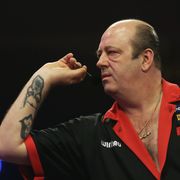 Former darts world champion Ted Hankey has been jailed for two years after pleading guilty to one count of sexual assault.

The 54-year-old pinned the young woman down and sexually assaulted his victim with an "air of entitlement", Chester Crown Court heard.

Judge Steven Everett, Recorder of Chester, said Hankey would have continued denying the offence "to the bitter end" it the attack had not been caught on film.

The footage was played to the judge after the courtroom had been cleared of public and press.

Hankey, of Stoke-on-Trent, pleaded guilty at an earlier hearing to one count of sexual assault on 10 September last year in Crewe, Cheshire.