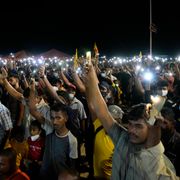 One person has been killed and 10 injured after police in Sri Lanka opened fire at people protesting fuel price increases.

The island nation is in the midst of its worst economic crisis in decades that has seen weeks of demonstrations.

Thousands of protesters continued to occupy the entrance to the president’s office for an 11th day Tuesday, blaming him for the economic crisis.

Police in the country said they shot at the protesters in Rambukkana, 55 miles northeast of the capital, Colombo.

US Ambassador Julie Chung and UN Resident Coordinator Hanaa Singer-Hamdy urged restraint from all sides and called on the authorities to ensure the people’s right to peaceful protest.

An interim government has been proposed three years before the next election in an effort to stabilise the country.

Sri Lanka is on the brink of bankruptcy and its people have endured months of shortages of essentials such as food, cooking gas, fuel and medicine, lining up for hours to buy the very limited stocks available.

The country’s prime minister Mahinda Rajapaksa – the president’s brother – said that the constitution will be changed to clip presidential powers and empower parliament, as protesters continued to demand the president, Gotabaya Rajapaksa, and his powerful family quit.

However, the brothers are likely to retain their grip on power even if the constitution is amended since they hold both offices.

They have both refused to step down, resulting in a political impasse as opposition parties rejected the president’s proposal of a unity government.