Spain: One migrant dead and 26 missing after dinghy capsizes off Canary Islands 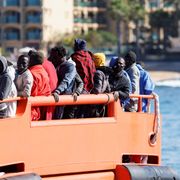 One migrant has died and 26 are missing after their dinghy capsized in the Atlantic Ocean off the coast of Spain’s Canary Islands.

The Spanish Coast Guard rescued 34 people after the vessel capsized around 135 miles off the southern tip of Gran Canaria on Monday.

Another two vessels carrying around 63 people, including two children, were found floating in the sea around 40 miles to the south.

All those onboard were rescued.

Authorities were alerted on Sunday to a dinghy that had left Cabo Bojador in Western Sahara, a disputed territory claimed by Morocco, with 60 migrants aboard. Only 34 of them have been found, the Coast Guard added.

A Spanish Coast Guard plane spotted the stricken boat and was assisted by two merchant vessels and a helicopter until a Spanish rescue ship arrived.

Read more from Sky News:
One dead and 16 missing after dinghy capsizes off Fuerteventura
More than 5,000 make journey across Channel in small boats so far this year

The rescued migrants arrived at Gran Canaria’s Arguineguin port around 10 a.m. on Tuesday morning. All of them were Sub-Saharan, the Coast Guard said.

Located around 60 miles to the west of Morocco, Spain’s Canary Islands have become a hot spot for migrants trying to reach Europe in recent years.