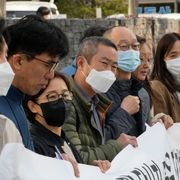 A group of South Korean adoptees in Europe are urging authorities to investigate their adoptions that they say were based on falsified documents and involved rights abuses.

About 200,000 South Koreans were adopted overseas in the past decades, mostly in the 1970 and 80s and mainly to white parents in the US and Europe.

Critics claim past authoritarian leaders saw adoptions as a way to reduce the number of mouths to feed, solve the "problem" of unmarried mothers and deepen ties with the democratic West.

"Our main goal is that all adoptees should have access to their own true information – background information," said Peter Moller, lawyer and co-head of the Danish Korean Rights Group who was adopted to Denmark in 1974.

"We are now fighting for the rights to know our own true story," he added during a press conference in Seoul.

He added that more than 300 applications had been handed in by South Korean adoptees calling for investigations to South Korea’s Truth and Reconciliation Commission.

The commission is a governmental body responsible for investigating incidents which occurred from Japan’s rule of Korea in 1910 through to the end of authoritarian rule in South Korea in 1993.

The hundreds of applications in relation to adoptions have been filed by people in Denmark, Norway, the Netherlands, the US and other countries.

Many want the Truth and Reconciliation Commission to find out if the government should also be held accountable for failing to monitor agencies and confirm whether the increase in adoptions was fuelled by increasingly larger payments and donations from adoptive parents.

It is this claim that many believe motivated agencies to create their own supply.

The complaints include inaccurate or falsified information in adoption papers that distort their biological origins, such as wrong birth names, dates or locations, or details about birth parents.

"The reason why we want to find the truth of past incidents isn’t meant to punish someone but is meant to resolve the resentment (of adoptees) and prevent the recurrence of similar incidents," activist Min Young Chang read from a joint statement by South Korean civic groups.

"When we resolve their resentment, adoptees in foreign countries can recover their identities and reconcile with adoption agencies and the Republic of Korea."

The commission said it plans to receive applications from adoptees by 9 December with a decision made on whether to launch an investigation later in the month.