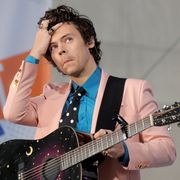 Skittles has appealed for people not to throw the candy after singer Harry Styles was reportedly hit by one of the sweets during a concert.

Styles was seen waving to the crowd before rubbing his eye as the sweets were thrown at him from the audience.

The incident took place during the 28-year-old’s concert in Los Angeles on Monday.

In a post on Twitter, Skittles said: "Didn’t think I needed to say this: Please don’t throw Skittles."

Video showed the singer flinching and then rubbing his left eye.

One social media post claimed "an orange skittle was the killer" and others said the behaviour from members of the audience was "so disrespectful".

Another Twitter user said a sweet appeared to "hit him right in the eye" while fans of the star said the footage made them "so angry".

In October, Styles was forced to temporarily stop during a concert in Chicago after a water bottle thrown from the audience hit his groin.

There is nothing new about confectionary being thrown at performers.

In the 1960s, George Harrison said he liked jelly babies – leading to the sweets being thrown on stage by adoring fans as The Beatles played.

Boxes of the sweets were also regularly delivered to the Fab Four as Beatlemania gripped the world.