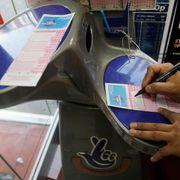 The prize has created the UK’s biggest-ever National Lottery winner, beating the previous record of £170m won by an anonymous ticket-holder in October 2019.

The claim will now go through a validation process, to ensure Camelot’s terms and conditions are met.

Once the ticket has been validated the winner will decide whether to go public or remain anonymous.

Camelot’s senior winners’ advisor at The National Lottery, Andy Carter, said: "This is absolutely incredible news. Last night saw history made with the biggest ever National Lottery prize won by a single UK ticket-holder, and we’re ecstatic that we’ve now received a claim.

"Our focus now is on supporting the ticket-holder through the process and helping them start to enjoy their truly life-changing and record-breaking win."

This is the second EuroMillions jackpot in the UK this year.

The £109m pot from the 4 February draw was claimed a few days later and the winner chose to remain anonymous.