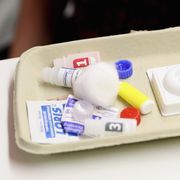 Sexual health services are "at breaking point" due to a devastating combination of funding cuts and soaring demands – particularly from the over 65s.

The Local Government Association (LGA) warned without more funding there could be an increase in unwanted pregnancies and sexually transmitted infections (STIs).

Meanwhile, sexual health services could struggle to deal with situations such as the outbreak of monkeypox cases.

It said while sexual health services working in the community are helping more people than ever before, budgets for public health spending have been "slashed".

It also highlights in 2021, there were almost two million diagnostic tests for chlamydia, gonorrhoea, syphilis, and HIV delivered by sexual health services – an increase of 19% compared to 2020.

The LGA said the rise in need comes after the public health grant to local authorities used to fund sexual health services reduced by more than £1bn between 2015/16 and 2020/21.

It is now calling on Chancellor Jeremy Hunt to commit to support the rise in demand for sexual health care in the fiscal statement on Thursday.

David Fothergill, chairman of the LGA’s Community Wellbeing Board, said the "perfect storm" of increased demand for services alongside continued cuts to funding was "unsustainable" and "risked a reversal in the encouraging fall in some STIs and potential increases in unwanted pregnancies".

He said the only way to combat this was with "long-term increases in the public health grant" in the statement.

"Cuts to spending on sexual health, as with other areas of public health expenditure, are a false economy," he said.

A Department of Health and Social Care spokesperson said more than £3.4bn had been provided to local authorities in England this year to fund public health services, including sexual and reproductive health.