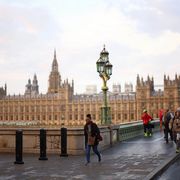 Dave Penman, chair of the FDA union, said concerns have been raised about the conduct of other ministers as Dominic Raab, the deputy prime minister, faces allegations of bullying by staff.

He said civil servants do not raise official complaints because they do not feel they will be taken seriously because of the way the complaints system works.

Asked by Sky News’ Kay Burley to confirm if civil servants have told the union that several ministers in Rishi Sunak’s government have behaved inappropriately towards them, Mr Penman said: "Yes."

And asked if that behaviour was bullying, he said it was.

He added that it is a continual issue over successive governments, with civil servants quitting over ministers’ behaviour as they feel they cannot do anything about it.

Mr Penman used the example of the investigation into Priti Patel, the former home secretary.

She was found to have bullied staff but Boris Johnson, the prime minister at the time, did not respond for six months and then dismissed the findings.

"There are concerns raised about a number of ministers, that is essentially a constant in government," Mr Penman added.

"It’s not just about this government. It’s every government. You know, there are dozens of ministers and stressful situations.

"And so at any point in time, you’re inevitably going to have a situation where there are concerns raised about the conduct of ministers. That’s why what you’re seeing isn’t just about Dominic Raab."

Over the past week, Mr Raab has faced allegations of bullying civil servants, including losing his temper and throwing food around his department.

On Monday, Mr Sunak said he does not "recognise that characterisation" of Mr Raab and said there have been no formal complaints made against his deputy.

A spokesman for Mr Raab earlier said: "Dominic has high standards, works hard, and expects a lot from his team as well as himself.

"He has worked well with officials to drive the government’s agenda across Whitehall in multiple government departments and always acts with the utmost professionalism."

"It’s been something of an open secret in Westminster for the last few years there is a problem in the justice department, there was a problem in the Foreign Office – it was apparently particularly directed towards women," she said.

"This is something that we hear coming out over and over again with this government, that there are accusations of bullying from the civil service.

"Lots of people who are not in positions of power, who feel that they can’t speak openly because of the huge repercussions and these rumours that swirl around Westminster.

"I think it’s really damning that Rishi Sunak has appointed Dominic Raab to this post knowing that this is potentially an issue."

A spokesman for Mr Raab said they "categorically deny" Ms Nandy’s allegation, while his team said his office has generally been female-dominated and suggestions he has a woman problem is "nonsense".

A source close to Mr Raab said: "This is baseless mudslinging with no grounding in reality, and undermines serious cases of bullying and inappropriate behaviour."