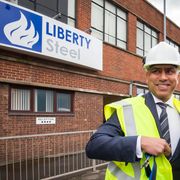 The Serious Fraud Office (SFO) has launched an "operation" at offices within Sanjeev Gupta’s GFG Alliance empire amid the fallout from the collapse of major funding provider Greensill Capital UK last year.

A fraud and money laundering investigation was launched against GFG, which includes Liberty Steel, almost a year ago at a time when it was battling to shore up its finances following the demise of Greensill – a firm that had paid former PM David Cameron as an adviser.

A number of sites were visited by SFO officials across England, Scotland and Wales and notices were served to request documents including GFG company balance sheets, annual reports and correspondence.

A spokeswoman for the SFO said: "Investigators spoke with executives at multiple addresses, who co-operated with the operation.

"As the investigation is ongoing, the SFO can provide no further comment."

GFG declined to provide a statement.

It has consistently denied any wrongdoing.

Such funding is a legitimate way of managing cash flow but the SFO is investigating activities within that business relationship as part of its inquiry into GFG.

That was launched in May last year to examine "suspected fraud, fraudulent trading and money laundering in relation to the financing and conduct of the business of companies within the Gupta Family Group Alliance".