Self-driving cars: Motorists will not be liable for crashes and can watch TV behind the wheel, government says 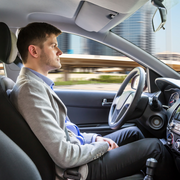 Users of self-driving cars will not be responsible for crashes and will be allowed to watch TV while behind the wheel under proposed changes to the Highway Code.

Insurance companies rather than individuals will be liable for claims if vehicles are involved in collisions, the Department for Transport (DfT) said.

However the update to the Code will make it clear that motorists must be ready to take back control of vehicles when needed.

While the DfT also intends to allow drivers to watch TV programmes and films on built-in screens while using self-driving cars, it will still be illegal to use a mobile phone.

These measures are an interim measure by the government to support the early deployment of self-driving vehicles.

There are currently no vehicles approved for self-driving on UK roads but the first models could be given the green light later this year.

It comes a year after the DfT announced it would allow hands-free driving in vehicles with lane-keeping technology on congested motorways.

While many cars already have "assistive" technology like cruise control and automatic stop/start, drivers must remain fully in control.

Transport minister Trudy Harrison said updating the Highway Code will be a "major milestone in our safe introduction of self-driving vehicles", which she claimed will "revolutionise the way we travel, making our future journeys greener, safer and more reliable".

She added: "This exciting technology is developing at pace right here in Great Britain and we’re ensuring we have strong foundations in place for drivers when it takes to our roads.

"In doing so, we can help improve travel for all while boosting economic growth across the nation and securing Britain’s place as a global science superpower."

The DfT believes that the development of self-driving vehicles could create around 38,000 new jobs in Britain and be worth £41.7 billion to the economy by 2035.

Steve Gooding, director of motoring research charity the RAC Foundation, said driverless cars "promise a future where death and injury on our roads are cut significantly" but there is likely to be a "long period of transition" while drivers retain "much of the responsibility for what happens".