Scotland: Campaigners call for complete ban on greyhound racing with some dogs found drugged with cocaine 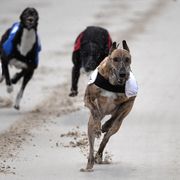 Campaigners are calling for an end to greyhound racing in Scotland after some dogs were found to be drugged with illegal substances such as cocaine, MSPs were told.

Scotland has just one regulated race track, the Shawfield Stadium in Rutherglen near Glasgow, alongside an unregulated track at Thornton in Kirkcaldy, Fife.

At the regulated track, 97 dogs were injured and 15 deaths were recorded in the same timeframe.

Campaigners from Scotland Against Greyhound Exploitation (Sage) have asked the Scottish Parliament’s Rural Affairs, Islands and Natural Environment Committee to call for a complete ban on the sport.

Speaking on behalf of Sage, Gill Docherty criticised the lack of regulation to protect the animals from injury and doping and said drug testing does occur at Shawfield – but in just under 2% of races.

Those tests revealed 13 dogs were positive for doping in the period from 2018 to 2019 – with Class A drug cocaine found in five of the dogs.

Ms Docherty said regulation does not work, with doping often not revealed by the GBGB for several months and going unreported to police and the Scottish Society for Prevention of Cruelty to Animals (SSPCA).

She added the lack of regulation at Thornton means "there is no vet present to euthanize a dog should it suffer a catastrophic injury".

GBGB estimates the real death toll of dogs is significantly higher than 15, as Thornton is not required to record casualty rates.

An industry ‘beyond reform’

Scottish Greens MSP Mark Ruskell has backed the petition to end greyhound racing in Scotland, which has received over 130,000 signatures. He said he thinks it is "an industry that is really beyond reform".

He said The Animal Welfare Act 2006, which places a duty of care on animal owners to protect them from suffering, does not go far enough to prevent harm caused to greyhounds.

The SSPCA recently came out in favour of a ban on greyhound racing.

The committee will now write to relevant stakeholders, including the Animal Welfare Commission, and to the Scottish government to seek clarity on regulation enforcement before taking the petition forward.

Mark Bird, chief executive of GBGB, said welfare was "paramount" in licensed greyhound racing, but added that the protection for racing greyhounds goes "far beyond" what is afforded to domestic dogs in the UK.

He added: "Each greyhound racing at one of our tracks is seen by a vet both before and after racing and their trainers’ kennels are regularly inspected by vets, our stipendiary stewards and independent auditors to ensure they comply with our high welfare standards."

The GBGB also have strict anti-doping policies and said all instances are reported to the appropriate authorities and could also result in a lifetime ban for trainers.