Russia to suspend natural gas supplies to Poland and Bulgaria 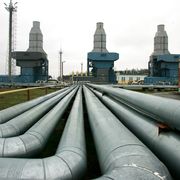 Russia is suspending natural gas supplies to Poland and Bulgaria.

Gas deliveries through the Yamal-Europe pipeline are set to come to a halt on Wednesday morning, officials in Warsaw said.

Poland’s state gas company, PGNiG, said on Tuesday it had been told of the move by Russian gas giant Gazprom.

Gazprom also informed Bulgarian state gas company Bulgargaz that it will halt gas supplies as of Wednesday, according to the country’s energy ministry.

It comes after Russian President Vladimir Putin said last month that "unfriendly" foreign buyers would have to pay the state-owned Gazprom in roubles instead of dollars and euros, which the international community has refused to do.

European Network of Transmission System Operators for Gas published flow charts on its website showing drastic drops in gas flows at entry points in Kondratki, a town in eastern Poland, and Vysokaye, in Belarus.

Gazprom was cited as saying that Poland now has to pay for its gas supplies under a new procedure by the Russian news agency Tass, but the Russian company did not confirm the suspension of gas supplies.