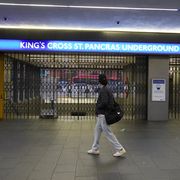 The rail union behind much of the strike action in recent months has a fresh mandate to strike for a further six months.

A total of 70.2% of members turned out to cast their ballots on the issue and as a result will be able to take strike action for another 6-month period.

Balloted members work for Network Rail and 14 train operating companies. Among these members, turnout was 64.4%.

In order to strike legally, 40% of essential transport workers must vote for strike action.

RMT general secretary Mick Lynch said the vote was an endorsement of the strategy to achieve improved pay and conditions through negotiation where possible and industrial action if necessary.

"The National Executive Committee will now look at these fantastic results and negotiations will continue with Network Rail and the train operating companies.

"This union is determined to continue with this campaign until the employers understand that they need to respond to our members’ aspirations on job security, pay and working conditions," he said.

The Fire Brigades Union (FBU) voted to reject a 5% pay offer which has paved the way for a vote on strike action.

Turnout was similarly high among firefighters and control staff as 79% voted to reject the 5% offer, with 78% of eligible members voting in the ballot.

A ballot on strike action will open on 5 December and close on 23 January.