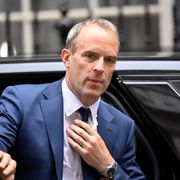 Allegations of bullying against Dominic Raab are "plausible", a former top civil servant has said following a slew of reports about the deputy PM’s behaviour.

Lord Simon McDonald, who was permanent secretary at the Foreign Office between 2015 and 2020, said Mr Raab was a "tough boss" and the claims about him are believable.

Numerous allegations about Mr Raab’s behaviour have surfaced in the media over recent days.

The allegations relate to his previous stint as justice secretary under Boris Johnson, with staff reportedly offered a "route out" of his department when he was reinstated in October.

Civil servants who worked with him told The Guardian he was a "very rude and aggressive" boss while another report claimed the justice secretary had acquired the nickname "The Incinerator" because he "burns through" staff.

And a survey of 20 people working in Mr Raab’s private office when he was foreign secretary in 2019 showed that 40% reported personal experience of bullying and harassment – though not necessarily by Mr Raab – and 75% witnessed it, ITV reported on Sunday.

Lord McDonald, who as Sir Simon McDonald was the permanent secretary at the Foreign Office while Mr Raab was foreign secretary, said bullying allegations were believable.

Asked by LBC radio if characterisation of Mr Raab as someone who could bully and around whom bullying could happen, he replied: "Yes."

"Dominic Raab is one of the most driven people I ever worked for, he was a tough boss," he said.

"Maybe they are euphemisms, but I worked closely with him and I didn’t see everything that happened."

Lord McDonald said he worked in the Foreign Office for nearly 40 years and while "pressure characterised most of those years… fractured relations between ministers and civil service were much more obvious at the end than at the beginning".

He said there is bullying in Whitehall and it is "very difficult for the system to deal with… especially when it happens at the top".

His comments came after Prime Minister Rishi Sunak said he did not "recognise that characterisation" of the man he reappointed as justice secretary and deputy PM, and denied knowing about any formal complaints against Mr Raab.

On Monday, Mr Sunak stood by his close ally, telling reporters travelling with him to Indonesia for the G20 summit: "I don’t recognise that characterisation of Dominic and I’m not aware of any formal complaints about him.

"Of course there are established procedures for civil servants if they want to bring to light any issues.

"I’m not aware of any formal complaint about Dominic."

But additional weight was added to the claims on Monday night following a report that Simon Case, the head of the civil service, was told by senior officials of concerns about Mr Raab’s abrasive treatment of junior staff and took steps to try to improve his behaviour.

According to Bloomberg, senior officials raised their objections about Mr Raab’s treatment of staff directly to Mr Case and while it did not constitute a formal complaint, the cabinet secretary took action by holding discussions with other officials over how to bring about changes in the justice secretary’s behaviour.

Antonia Romeo, the permanent secretary at the Ministry of Justice, reportedly then discussed the matter personally with Mr Raab.

In response to the report, a spokesperson from the MoJ told Sky News Mr Raab and the permanent secretary "meet frequently to discuss the effective running of the department that they’re both responsible for".

A Cabinet Office spokesperson said: "We have no record of any formal complaints."

The allegations will prove troublesome for Mr Sunak, whose choice of cabinet colleagues has already been called into question.

The prime minister came under fire for reappointing Sir Gavin Williamson to his senior team despite being told he was under investigation for allegedly bullying a colleague, claims that caused Sir Gavin to quit.

He also faced criticism for reinstating Suella Braverman as home secretary just six days after she was forced to step down over a security breach.

Deputy Labour leader Angela Rayner has reiterated demands for an independent investigation to be launched.

"It is anti-bullying week, but instead of holding the bullies to account this prime minister is cowering behind them. Rishi Sunak clearly knew about Dominic Raab’s reputation when he reappointed him to his cabinet," she said.

"Rishi Sunak put the Tory Party before the country and cut a series of grubby deals to avoid facing a leadership contest, his cabinet is overflowing with ministers embroiled in misconduct allegations. An independent investigation into Dominic Raab must urgently be launched."

The Liberal Democrats have written to Mr Case to ask for a list to be published of ministers with "credible allegations of bullying" made against them.

Read More:
Sunak’s premiership is about to start for real – he faces a huge week at home and abroad

Despite the stream of allegations, Mr Raab will face MPs when he stands in for his party leader during prime minister’s questions on Wednesday.

A spokesman for Mr Raab said of previous reports: "Dominic has high standards, works hard, and expects a lot from his team as well as himself.

"He has worked well with officials to drive the government’s agenda across Whitehall in multiple government departments and always acts with the utmost professionalism."