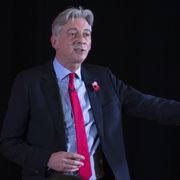 Scottish Labour leader Richard Leonard has resigned with immediate effect, just months before the next set of Scottish Parliament elections.

In a statement, he said it was "not an easy decision" but the "right one for me and for the party".

Mr Leonard, who had been party leader since 2017 and is an MSP for Central Scotland, had faced calls from some fellow MSPs to go.

In September, James Kelly, Daniel Johnson and Jenny Marra all demanded that he quit.

At the time, Mr Leonard vowed to lead the party into the next set of Holyrood elections in May.

But he has now taken the decision to step aside.

"I have thought long and hard over the Christmas period about what this crisis means, and the approach Scottish Labour takes to help tackle it," Mr Leonard explained in his resignation statement.

"I have also considered what the speculation about my leadership does to our ability to get Labour’s message across. This has become a distraction.

"I retain my faith in the Labour Party as the party that offers hope to people and that remains the only vehicle for the realisation of that hope."

"I would like to thank Richard for his service to our party and his unwavering commitment to the values he believes in," the Labour leader said.

"Richard has led Scottish Labour through one of the most challenging and difficult periods in our country’s history, including a general election and the pandemic.

"Even from opposition, he has achieved a considerable amount for which he should be very proud."

Neil Findlay, Labour MSP for Lothian, said "flinching cowards and sneering traitors" were responsible for Mr Leonard’s downfall and they "make me sick".

"Looks like those who have led a 3 year campaign of briefings to journalists, leaks of private conversations and the constant feeding of stories to the media to bring down a decent and honest man have succeeded," he tweeted.

Mr Leonard’s departure means Scottish Labour will be looking for its fifth leader since Scottish voters rejected independence from the UK in a 2014 referendum.

Leaders from across the political divide paid tribute to Mr Leonard in the wake of his announcement.

"He is a decent guy and I wish him well for the future."

Scottish Conservative MSP Ruth Davidson said on Twitter: "When I stepped down in August 2019, I discovered that political resignations are odd things, like reading obituaries when you are still alive.

"Whatever else is written about Richard, I have to say I always found him a thoroughly decent man and a committed campaigner."

Willie Rennie, leader of the Scottish Liberal Democrats, described him as a "good man who cares deeply about his politics and his party".