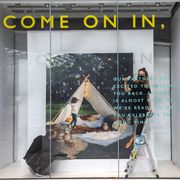 Retail sales slumped in Britain during April, reflecting the caution of shoppers as the cost of living crisis worsens.

Figures from the Confederation of British Industry (CBI) showed the first year-on-year fall in sales volumes in 13 months, with the balance falling to -35, well below the +9 seen in March.

Companies said they expect volumes to continue to decline, although at a more modest pace, as firms predicted a -8% reading for May.

The CBI survey deducts the number of firms saying they reported a decline in sales from the number reporting growth for the period.

Some 63% of shops said sales volumes fell, compared with 28% who said they had risen.

Comparing the figures with those seen at the same time last year means comparing them with a time when many non-essential shops saw a surge in sales as they reopened after COVID restrictions.

But even after adjusting for seasonal effects, retail demand was weak as sales fell to -24 in April from the -23 seen in March. They are expected to remain weak in May, though with some improvement (-17%).

Millions of people in Britain are facing big increases in energy bills, council tax, and a national insurance tax rise – as well as inflation hitting a 30-year-high of 7%.

Pay is not keeping up – employers offered an average 4% annual pay rise in April.

"Rapid inflation means that the cost-of-living crisis is going nowhere soon. To combat these challenges, the government will need to keep a close eye on support for vulnerable households and businesses struggling with higher energy prices."

Mr Sartorius added: "Meanwhile, going for growth must continue to be the government’s primary domestic focus, as increasing productivity growth is the only sustainable route to raise living standards."

The CBI carried out its survey between 25 March and 13 April, and had responses from 51 retail chains.