Remembrance Sunday wreaths attacked and set on fire in Edinburgh 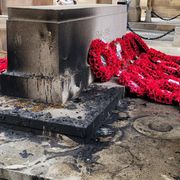 A number of poppy wreaths have been set on fire in Edinburgh hours after Remembrance Sunday commemorations.

The floral tributes were destroyed at the Stone of Remembrance in the early hours of Monday, November 14.

Police Scotland believe the blaze was started deliberately around 5am.

Footage on social media shows the charred remains of the poppies.

Scotland’s First Minister Nicola Sturgeon was among hundreds of people who gathered to pay their respects at the city centre memorial on Sunday.

The Provost of Edinburgh described the attack as "disgusting and disrespectful".

Robert Altridge told Sky News: "Yesterday it was my honour to lay a wreath on behalf of the City of Edinburgh to remember those who served and sacrificed so much.

"The vandalism discovered this morning not only to the recently laid wreaths but also Edinburgh’s Stone of Remembrance is disgusting and disrespectful.

"We remain at a loss for the reasons someone could do something like this which has caused a lot of upset for everyone who respects the memories of all who serve their country."

Chief Inspector Murray Tait said: "Our enquiries are ongoing after poppy wreaths were set on fire at the war memorial in High Street, Edinburgh around 5am on Monday, 14 November.

"Officers are carrying out enquiries and gathering CCTV footage to find out more information on whoever is responsible.

"I utterly condemn this appalling act of vandalism, especially at this time of year when remembrance services have just been held across the country."

It is understood the ruined tributes have been removed and will be replaced by the charity Poppy Scotland.