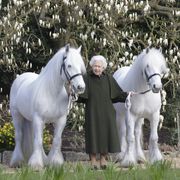 The Queen is set to celebrate her 96th birthday at Sandringham – the Norfolk estate where she enjoyed family gatherings with the Duke of Edinburgh.

To mark the occasion, organisers of the Royal Windsor Horse Show released an image of the monarch taken last month at Windsor Castle.

It comes after an eventful Easter break that saw the Duke and Duchess of Sussex visit her.

Read more: Queen says she was left ‘very tired and exhausted’ during her bout of COVID-19

Harry said his grandmother was "on great form" when they met before he and wife Meghan travelled to the Netherlands for the Invictus Games.

Speaking to NBC’s Today show, he pointedly added he wanted to make sure she was "protected" and had "the right people around her".

It is thought the monarch will stay at the Duke of Edinburgh’s cottage Wood Farm while at Sandringham, a property she said her late husband "loved" and part of its attraction was because the "sea was so close".

The Queen commented on the property when she hosted a rare public event at Sandringham on 5 February, the eve of her Platinum Jubilee.

Teresa Thompson, 70, the retired housekeeper of Wood Farm, said after chatting to the Queen that day: "All the Royal Family love Wood Farm, because it’s out of the way, it’s small, it’s intimate.

"You haven’t got lots of officials, it’s just the close staff.

"And they literally can relax in the family house, it’s wonderful, and I had a wonderful 22 years down there, it was the best time of my life without a doubt."

The Queen’s 96th birthday has also been marked by Barbie, with the toy brand releasing a limited-edition doll version of the monarch.

Dressed in an elegant ivory gown and adorned with decorations of order, the doll also features a tiara modelled on Queen Mary’s fringe tiara, which Queen Elizabeth II wore on her own wedding day.

A pink ribbon on the figure imitates one given to Her Majesty by her father, George VI, while a blue one is based on a gift from her grandfather, George V.

It will be presented in a box inspired by the styles of Buckingham Palace and will include an inner panel showing the throne and the red carpet of the throne room.