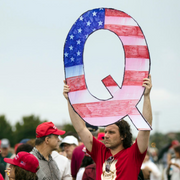 QAnon supporters have again gathered at the site of JFK’s assassination in Dallas to await the return of his son, who died in a plane crash 22 years ago.

John F. Kennedy Jr, son of the 35th president, and two other people were killed in a light aircraft crash in 1999 and their bodies were recovered from the Atlantic Ocean.

However, an off-shoot of the QAnon group has claimed that this was staged and JKF Jr will make a return from the dead to announce a presidential bid alongside Donald Trump.

On Monday, about 100 people gathered at Dealey Plaza, with a few wearing "Trump – Kennedy 2024" shirts, to await the unlikely arrival of JFK Jr.

It follows similar gatherings in recent weeks where crowds were left disappointed as the former president’s son failed to show up – and Monday’s was no different.

The far-right group’s theories are largely based on the belief that their leader, Q, was an insider to the Trump administration who had leaked information about the "deep state" and the ongoing war between good and evil.

This includes a cabal of Satan-worshiping, cannibalistic paedophiles, which includes many prominent Democrats and Hollywood stars, who Mr Trump was leading the fight against.

The JFK Jr theory has grown in popularity among parts of the Q movement, prompted by posts on social media.

And in the latest development, some now believe the eponymous Q is in fact JFK Jr.

QAnon supporters were strongly linked to the Capitol riots in January, and last week self-styled "shaman" Jacob Chansley was jailed for his involvement in storming the building in Washington.