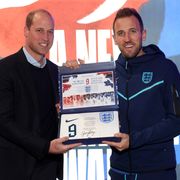 Prince William has confessed his divided loyalties ahead of a hotly anticipated World Cup face-off between England and Wales.

The Prince of Wales, who is also head of England’s Football Association (FA), told members of the Welsh Parliament that he’ll be "supporting both" nations when they meet in the World Cup group stage later this month.

In a visit to the Senedd chamber in Cardiff, William admitted he usually supports England in football and Wales in rugby.

But for the "big deal" of Wales’s first World Cup finals tournament since 1958, William said, his loyalties will have to be shared.

"I’ve supported England since I’ve been quite small, but I support Welsh rugby and that’s my kind of way of doing it.

"I happily support Wales over England in the rugby.

"When I was growing up, Wales didn’t get through to the tournaments so I had to make a choice.

"[But] I’ve got to be able to play carefully with my affiliations because I worry otherwise if I suddenly drop England to support Wales then that doesn’t look right for the sport either. So I can’t do that."

William added that an England versus Wales World Cup final "would be the best".

Prince William is also expected to reiterate to members of the Senedd later today that he has no plans for an investiture as Prince of Wales, the ornate (and expensive) installation ceremony attended by his father in 1969.

The Prince and Princess of Wales made their first home as newlyweds at Anglesey, the picturesque island off Wales’s north west coast.

A royal source said of Catherine after the Queen’s death: "The new Princess of Wales appreciates the history associated with this role, but will understandably want to look to the future as she creates her own path."