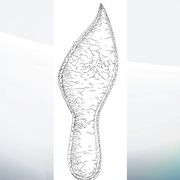 A craze for pointy-toed shoes led to a sharp increase in bunions for people centuries ago, according to a study of skeletons.

Researchers from Cambridge University examined 177 skeletons from four cemeteries in and around the city.

The rise was about the same time as poulaines – pointy-toed shoes – were increasingly popular.

Dr Piers Mitchell from the university’s Department of Archaeology said: "The 14th century brought an abundance of new styles of dress and footwear in a wide range of fabrics and colours.

"Among these fashion trends were pointed long-toed shoes called poulaines.

"The remains of shoes excavated in places like London and Cambridge suggest that by the late 14th century almost every type of shoe was at least slightly pointed – a style common among both adults and children alike.

"We investigated the changes that occurred between the high and late medieval periods, and realised that the increase in hallux valgus over time must have been due to the introduction of these new footwear styles."

A bunion – hallux valgus – is a bony bump that forms on the joint at the base of the big toe. It occurs when some of the bones in the front part of the foot move out of place.

Thirty-one of the skeletons showed signs of bunions and it was more likely among those who were wealthy, those buried in urban areas, and those who were clergy.

At a cemetery just south of the city, only 3% of skeletons showed signs of bunions and at a parish graveyard on the edge of town mainly for the working poor, the number was 10%.

But this rose to 43% at a former Augustinian friary containing the skeletons of clergy and wealthy benefactors.

Perhaps because of the difficulty in balancing while walking in the shoes, those who died aged over 45 were also more likely to show signs of fractures that could have resulted from falls.

Church officials were not fans of the stylish clothes that started to became popular among clergy in the 13th and 14th century.

They banned the shoes for clergy in 1215 but it seems the decree appears to have made little difference, as further bans had to be passed in the following centuries.

King Edward IV was also not a fan and in 1463 he passed a law limiting toe-point length to less than two inches for those in London.

The study is published in the International Journal of Paleopathology.