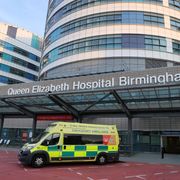 Police are appealing for help in finding a pair of specialist operating glasses which were stolen from a surgeon’s car in Birmingham.

Stephen Rooney’s glasses or ‘loupes’ are needed to perform life-saving surgery but they went missing on Saturday outside the Queen Elizabeth Hospital.

Mr Rooney is a consultant cardiac surgeon at the hospital and his loupes are essential for the complicated heart procedures he carries out.

West Midlands Police said the glasses are custom-designed and are of no use to anyone else.

The urgent appeal has been made because it could take up to six weeks for a replacement pair to be made and in the meantime Mr Rooney is unable to operate.

A force spokesman said: "Our priority is for the glasses to be returned to the hospital, and we are appealing directly to the people who’ve taken them to do the right thing and take them back."

The stolen glasses are described as having a black frame. They have the name ‘Stephen Rooney’ engraved in the arms.

They had been in a black and aluminium box, also with his name on it, when they were taken. A folding golf cart was also stolen from the passenger footwell of the car.

Anyone with any information about the incident is being urged to contact West Midlands Police.